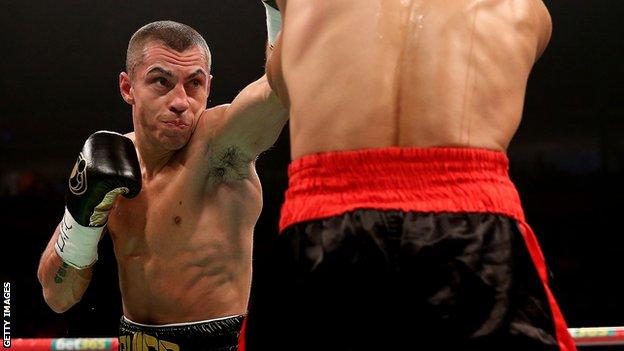 Scott Quigg says defending his world crown in front of a home crowd in Manchester was "a dream come true".

Quigg, from nearby Bury, to retain his WBA super bantamweight title.

"To be stood on that ramp making my entrance in front of 20,000 people was a dream come true," the 25-year-old told BBC Radio Manchester.

"When you fight in front of that many, it's going to bring pressure, but it's something I seem to thrive on."

Unbeaten Quigg, who has a professional record of 27 wins and two draws, continued: "The pressure brings out the best in me.

"I wanted to make a statement after [a majority draw against Yoandris Salinas in October]. I knew Diego Silva was going to come to fight and I was ready for that. I thought he was going to leave openings.

"I was pretty fired up and, as long as I didn't make any mistakes, I was confident I was going to come out on top."

Quigg, who is now targeting a unification bout with IBF champion Kiko Martinez, was of the world title fight between Carl Froch and George Groves, which ended with a in favour of champion Froch.

to stop the fight but and Quigg believes the Londoner has good reason to expect another shot at Froch.

"It was a cracking fight," said Quigg. "Groves was winning the fight and was boxing to a superb game plan.

"I thought Froch was coming on top but there's no way that fight should have been stopped when it was stopped."