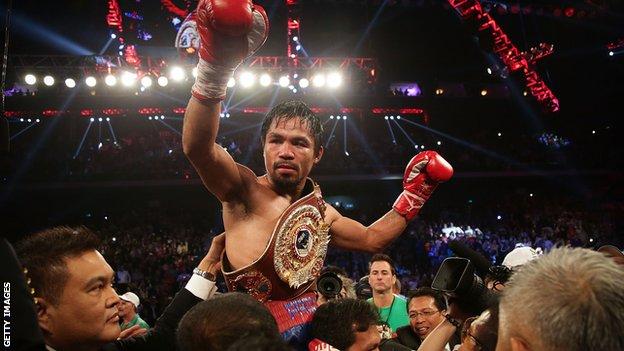 The man from the Philippines said he would win to bring "pride and hope" back to his beleaguered nation, which is struggling to come to terms with the loss of life and devastation caused by Typhoon Haiyan.

In front of a crowd unanimously in his favour, he dominated former world lightweight champion Rios to win on points, landing at will and never looking in trouble.

In truth, Rios was not in the class of previous Pacquiao opponents. His ponderous style of walking forward without using a consistent jab was tailor-made for the 34-year-old, who showed no rustiness, even though he had not fought since he was knocked out in losing to Juan Manuel Marquez last December.

His victory - at the Cotai Arena, inside Macau's Venetian Hotel - was watched by a near-capacity crowd of 13,200 fans, who cheered as pictures of Pacquiao meeting former England footballer David Beckham in his dressing room before the fight were beamed into the arena.

Aside from Beckham, a host of stars had made the trip to this quirky casino resort in East Asia, some from Hollywood and others from China.

Pacquiao was smiling as he entered the ring, in contrast to the earlier arrival of his 27-year-old opponent, who scowled.

After a cagey opening 60 seconds, Pacquiao controlled the first round, landing jabs and hooks at will.

He drew roars in the second when he hit Rios flush with a left hand and several follow-up blows, but the Texan took them all and stayed on his feet.

The pattern continued in the third - Pacquiao beating the oncoming Rios to the punch, his speed the dominant factor in the bout.

By the end of round six, Rios's right eye was closed after absorbing numerous straight punches. There were moments in the seventh round when a stoppage seemed possible, with Rios on the back foot and not offering much in return.

Now cut above his left eye, his most notable achievement was the repeated warnings from the referee for holding and hitting when in clinches.

It was a surprise to see Rios come out for the 12th and final round, so comprehensive had the beating been. When it finished, the two boxers stood and eyed each other, before embracing.

The judges scored the fight 120-108, 119-109 and 118-110 in Pacquaio's favour, as Rios suffered only his second defeat in 34 fights. Pacquiao, who fell to successive defeats against Marquez and Timothy Bradley before this victory, has a record of 55 wins, five defeats and two draws.

On the undercard, there was disappointment for the American-based Liverpudlian Liam Vaughan, who was pulled out of his light middleweight contest with Dan Nazareno after two rounds.

The 23-year-old took a beating from his Filipino opponent on his way to a second defeat in 10 fights.