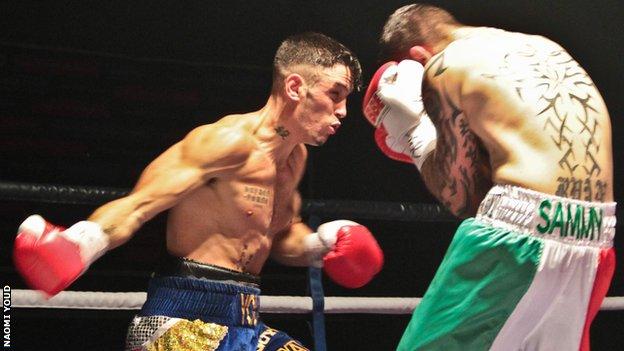 Swindon's Kelvin Young says contesting for the IBO International super middleweight title will be the biggest fight of his career.

Young announced on Monday he will challenge for the vacant belt in his home town on 7 December.

His opponent has not yet been confirmed but it is expected to be German-based Syrian Baker Barakat.

He's the pinnacle of super-middleweight boxing. Going up and sharing a ring with Carl was great. Everything about him is world class

"When I turned pro, I always dreamt about fighting for titles," the 26-year-old told BBC Wiltshire.

"If you'd have told me four years ago I'd be fighting for this title, I'd have laughed at you.

"This is the biggest fight I've ever had."

A former Masters winner, Young has had to vacate his Southern Area title, which he won last month, in order to take the contest.

"This is a massive opportunity for me and hopefully it means there will be other big challenges out there for me," he added.

Young has been sparring with four-time world champion Carl Froch in preparation for his next fight and says it has made a huge difference to his training.

"He's the pinnacle of super-middleweight boxing," said Young. "Going up and sharing a ring with Carl was great. Everything about him is world class.

"I'm putting myself around the right people, who are going to push me on in my career. Hopefully it will spur me on to win the title."