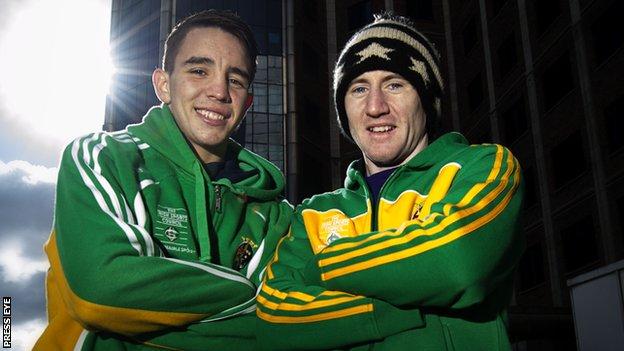 Four Belfast boxers are included in the 10-strong team named by Ireland for the World Amateur Championships being held in Kazakhstan.

Olympic bronze medallists Paddy Barnes and Michael Conlan, along with Sean McComb and Tommy McCarthy, will compete at the 11-27 October tournament.

Gary McKenna from Monaghan has been named at bantamweight.

He is a replacement for London 2012 silver medallist John Joe Nevin, who looks poised to turn professional.

Nevin, a 24-year-old from Mullingar, won gold at the European Championships in June.

Another European champion, Jason Quigley, is in the Ireland team and will be aiming to add a second major elite medal to his collection in the middleweight class.

Joe Ward and Ray Moylette, both former World Youth and European Elite champions, line out at light-heavy and light-welter.

London 2012 Olympian Adam Nolan and Con Sheehan have also been named in the Irish squad.

Barnes missed out on a chance win gold at the European Championships in Minsk in June as he was not allowed to compete in the light-flyweight final because he had sustained a broken nose.

His Russian opponent David Aryapetyan was handed the gold medal on a walkover with Barnes having to settle for the silver.

Conlan lost the flyweight final on a split decision to his big rival Andrew Selby of Wales.