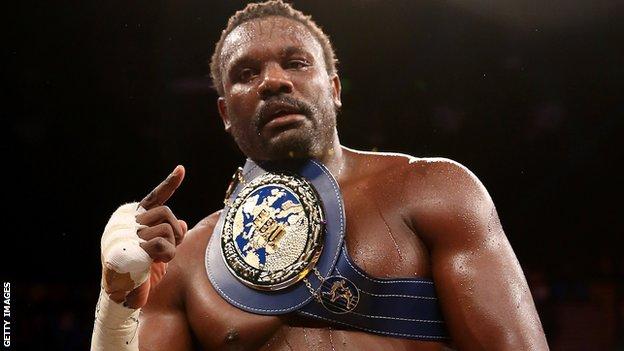 The 29-year-old, who harbours hopes of another world title shot, drew blood from Gerber in the third round.

A series of combination shots cornered Gerber in the fifth, prompting the referee to end the contest.

Elsewhere on the card, Frankie Gavin retained his British and Commonwealth titles against David Barnes.

My mum told me to either do it seriously or stop, so now I'm going to do this seriously

He enjoyed the early momentum against his 17st rival, claiming the first three rounds, before weathering a fightback in the fourth.

On the resumption Chisora assumed control and caught his bigger opponent on the jaw before following up with a sustained flurry of blows to prompt the stoppage.

"I've been training every day," said Chisora, who now has 18 wins and four losses.

"I told my team I'm going to give myself three years in this game, training every day.

"I've woken up. My mum told me to either do it seriously or stop. So now I'm going to do this seriously."

The win could pave the way for a fight with the winner of the postponed Haye v Tyson Fury bout, or a world title match with Wladimir or Vitali Klitschko.

After watching his fighter claim the European title, Chisora's promoter Frank Warren raised the prospect of a fight with Fury in December.

Meanwhile, at the Liverpool Olympia Derry Matthews delivered a devastating body shot to Curtis Woodhouse to force a fourth-round stoppage and retain his Commonwealth light-welterweight title.

Smith's win means his family becomes the first to hold three British titles at the same time, with brothers Paul and Stephen holding belts at super-middleweight and super-featherweight respectively.

Billy Joe Saunders beat John Ryder in their British middleweight title clash at the Copper Box Arena on the site of the London 2012 Olympics.