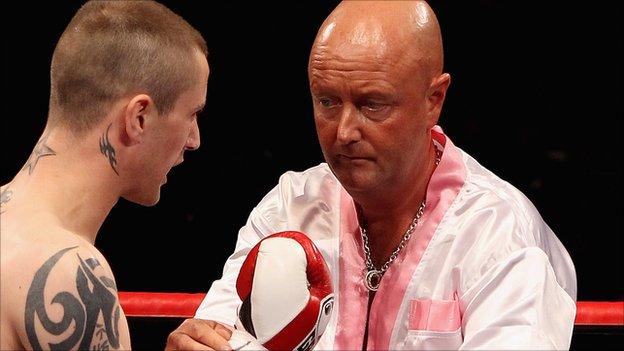 Promoter Frank Warren has paid tribute to his former "friend and colleague" Dean Powell following his death on Tuesday at the age of 46.

Powell spent 25 years in boxing as a trainer, cornerman and matchmaker.

He worked with some of Britain's ring greats, including Lennox Lewis, Joe Calzaghe and Amir Khan.

"All of us are deeply saddened and shocked by the loss of our very close friend and colleague, Dean Powell," said Warren in a statement.

Dudley-born Powell moved to London in the 1980s and trained boxers at the legendary Thomas A Becket gym as well as The Royal Oak in Canning Town.

"Dean was a valued and popular member of our team and within the sport of boxing and our thoughts and prayers are with his family and loved ones for their tragic loss," added the statement.

Powell was in the corner for several world title fights, and former undisputed unbeaten world light-heavyweight and super-middleweight champion Calzaghe paid tribute to him on Twitter.

Calzaghe wrote: "Shocked and saddened to hear the news of Dean Powell. Was in my corner for many of my big fights. RIP Dean x."

London 2012 bronze medallist Anthony Ogogo also paid tribute to Powell on the social media site, saying: "Shocked and saddened to hear about the death of Dean Powell. Boxing has lost a great guy. RIP my friend."