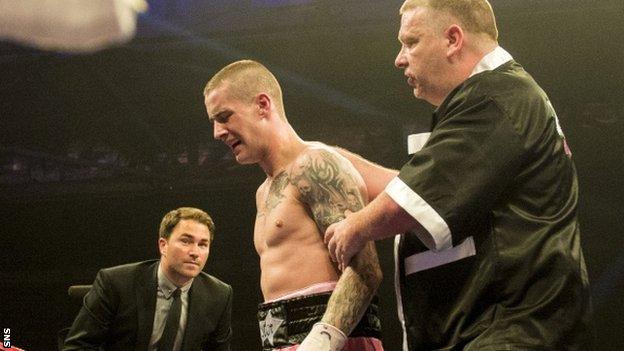 Ricky Burns says he will definitely fight again despite breaking a jaw in his world title defence on Saturday, according to his manager.

The WBO lightweight champion is due out of hospital later following surgery.

"I spoke to him this morning and he is definitely coming back, although when that will be, we don't know."

Saturday's fight at the SECC with Beltran, and many other observers believing the 32-year-old Mexican had won.

Burns's camp say their fighter sustained a broken jaw in the second round.

He had an operation to insert titanium plates on Sunday amid speculation about his boxing future and another match-up between the two fighters.

Hearn suggested that, if he did return to the ring, Burns might have to move up a weight.

The promoter and Beltran's manager, Steve Feder, did not think a rematch was likely, with the latter suggesting his boxer would not be keen to return to Scotland.

However, Morrison believes Burns owes Beltran another shot at the title - and says the Coatbridge fighter is keen for it happen.

"It's the moral thing to do," he said. "Ricky wants to fight him again here in Scotland in front of another packed crowd.

"But it will only take place here in Scotland.

"If Beltran wants a rematch, he'll have to come here again."

On Monday evening, Burns took to the social network Twitter and seemed to echo Hearn's earlier promise that the fighter would return for a rematch with Beltran, posting: "Thanks every1 for the messages, fingers crossed the damage isn't too bad and we can get the rematch on the go."