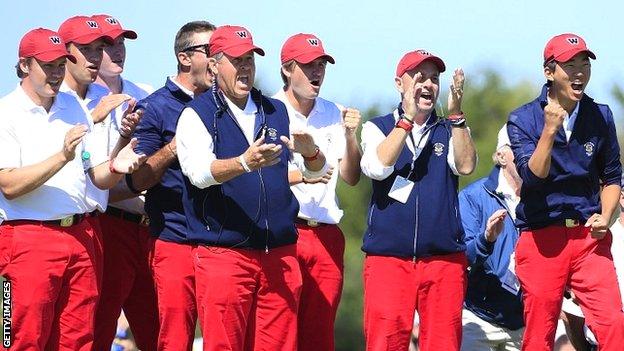 The United States produced a commanding display in the singles to lead Great Britain & Ireland 8-4 after day one of the Walker Cup on Long Island.

Defending champions GB & Ireland, who won 14-12 at Royal Aberdeen two years ago, were 2½-1½ up after the foursomes.

But the home side won the first six of the eight singles, losing only one.

The contest concludes on Sunday with a further four foursomes and 10 singles, with the first team to reach 13½ points securing the trophy.

In the opening match at the National Golf Links of America in Southampton, Nathan Kimsey and Max Orrin were ahead on six occasions but Bobby Wyatt holed a two-foot birdie on the last to win the hole and halve the match.

Matt Fitzpatrick, the 18-year-old from Sheffield who last month became the first Englishman since 1911 to win the US Amateur Championship and is the world's top-ranked amateur, partnered Neil Raymond to victory over Jordan Niebrugge and Nathan Smith.

Raymond sent an eagle attempt to three feet and Fitzpatrick calmly rolled the ball in for a one-up victory.

The visitors moved further ahead when Garrick Porteous and Rhys Pugh defeated Michael Weaver and Todd White three and one.

Victory was clinched at the 372-yard 17th as Welshman Pugh hit his wedge approach shot to four feet.

Weaver also hit a fine wedge approach to seven feet, but White missed the birdie attempt and the GB & Ireland putt was conceded.

Patrick Rodgers and Justin Thomas defeated Gavin Moynihan and Kevin Phelan two and one after taking the lead at the 15th and recording the clinching birdie at the 17th when Rodgers struck a 111-yard wedge to six feet.

That momentum continued in the singles as Wyatt came from two down after six holes to beat Raymond 2up.

Max Homa raced to four up by the turn and beat Orrin 5&3, while Michael Kim won three holes in succession to see off Callum Shinkwin 2&1.

Fitzpatrick won the first hole of his match against Weaver with a birdie but three fives on four holes on the back nine allowed the American to move ahead and the match ended on the 17th as Weaver carded a birdie three.

Moynihan claimed the only singles success for the visitors with six birdies against Rodgers, the last of which was inspired by an inventive pitch and run to two feet at the 17th to secure a 2&1 victory.