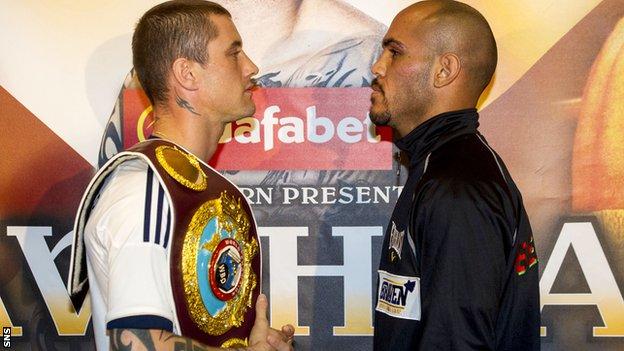 Promoter Eddie Hearn claims Ricky Burns can be regarded as the best Scottish boxer ever if he defends his WBO lightweight title for the fourth time.

Burns faces on Saturday in Glasgow.

"The run of fights he's had and the string of defences puts him up there as the greatest Scottish fighter of all time," said Hearn.

"He doesn't believe his own hype, which is great as a fighter. But he's got to remember he's a huge, huge talent."

There are two Scots already in the International Boxing Hall of Fame - Benny Lynch and Ken Buchanan.

And Hearn knows Burns will always play down his chances of being considered better than those fighters.

"He laughed at that because that's what he's like," said Hearn. "I just believe that Ricky is a two-weight world champion.

Burns's bout with 32-year-old Beltran, a former sparring partner of boxing legend Manny Pacquiao, comes after the Coatbridge boxer's wife, Amanda, gave birth to their first child at the end of August.

But the 30-year-old insists the new arrival has not brought any distractions to his preparations.

"Things have been going along as normal," said Burns. "Throughout the pregnancy, there's been no complications, Amanda's been great.

"Now the baby and that are home, I've been able to focus fully on the fight."

Burns reckons it will be "a cracking fight" against Beltran.

"The fans are in for a real treat here," added the Scot. "He comes to fight, I won't need to go looking for him.

"We've trained for a hard 12 rounds because I believe this fight's going to go the distance.

"I'm hoping to go out and get the win and then go for the big fights that Eddie was talking about."