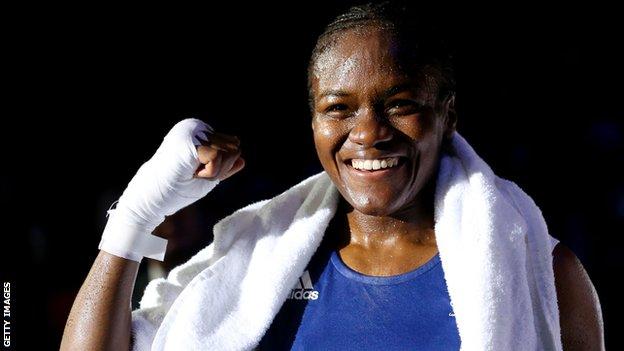 It was Adams's first competitive fight since she became the first woman ever to win an Olympic boxing gold medal with her defeat of Ren Cancan of China.

Adams was in action for the first time after hand surgery at the end of 2012.

The Leeds-born 30-year-old forced the Italian into a standing count near the end of the bout.

"I was a bit ring-rusty, I haven't boxed since the games last year so she put me through my paces and I'm glad it went all four rounds."

The heads a four-strong British team at the EU Championships, taking place in Keszthely, Hungary.

Natasha Jonas was the first Briton to see action, easing to a unanimous points victory over Ester Konecna of the Czech Republic.

The rest of the GB squad comprises reigning middleweight world champion Savannah Marshall, 22, and 28-year-old Lisa Whiteside, who will compete in the 54kg bantamweight category.