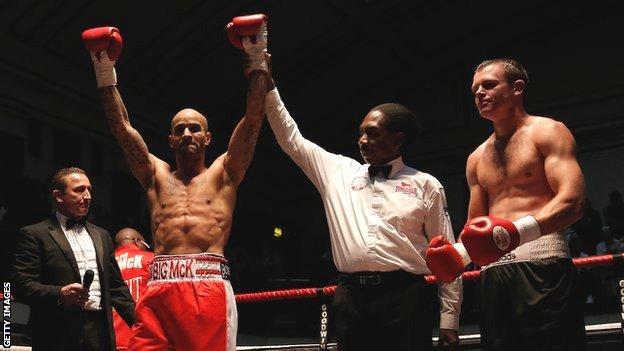 Former footballer Leon McKenzie won his first fight as a boxer when he beat John Mason in their super-middleweight contest at York Hall in London.

McKenzie, who played in the Premier League as a striker for Norwich, overwhelmed 29-year-old Mason, who had lost his last five fights.

Made debut for Crystal Palace in 1995-96 season and helped them gain promotion to the Premier League. Moved to Peterborough in 2000 and scored 46 goals in 90 games. Scored 20 goals in 79 appearances and won promotion to PL with Norwich. Joined Coventry in 2006, scoring 12 goals in 62 games. Played for Charlton, Northampton, Kettering and Corby.

The 35-year-old twice sent Mason to the canvas before the bout was stopped.

He is trained by uncle and former three-time world champion Duke and switched to boxing after retiring from football in December 2011.

McKenzie scored 115 goals in 405 games for eight clubs. He since had depression and was jailed for trying to avoid speeding convictions before embarking on his boxing career.