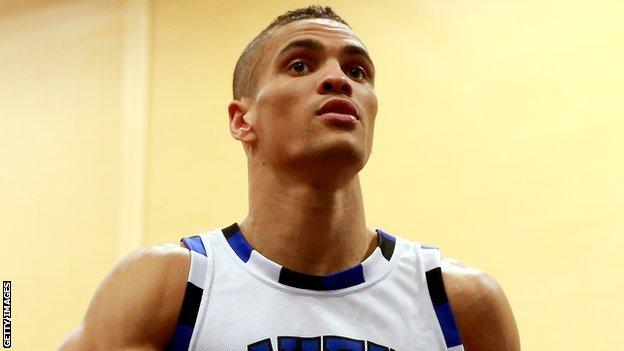 British Olympic medallist Anthony Ogogo is hoping to feature on the card of the Floyd Mayweather Jr and Saul Alvarez bout in September.

The fight, to be staged by Oscar De La Hoya's Golden Boy Promotions, is expected to be one of the most financially lucrative in history.

"Let's not write anything off yet," Ogogo told BBC Radio Suffolk.

"My fingers are very much crossed for getting on that card. It's a massive card," added the 24-year-old.

Lowestoft's Ogogo won a middleweight bronze medal at London 2012 and subsequently turned professional with Golden Boy, owned by retired 10-time world champion De La Hoya, who fought and lost against Mayweather in 2007, a match that drew a record £12m ($18.4m) in gate receipts at the MGM Grand in Las Vegas.

The clash at the same venue between Mayweather and Mexican Alvarez, who are both undefeated, is expected to surpass that total and break numerous box office records.

"My friend was in New York and he said Times Square came to a standstill," said Ogogo.

"They will probably have eight or nine fights on the card and a little lad from Suffolk getting on such a massive card would be unbelievable."

The bright lights of Vegas will have to wait though, with Ogogo set to fight in Hull on the card of Olympic team-mate and gold medal winner

Both men have yet to learn of their opponents.

"We're really good mates [talking about Campbell], we talk daily," said Ogogo, who has won both his professional fights to date.

"We're a year on from the Olympics and it would be nice to reignite the Olympic fever in the boxing community."