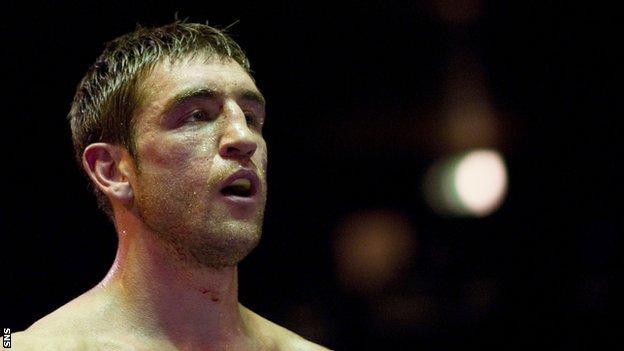 The 35-year-old from Edinburgh revealed the news on Wednesday via Twitter.

''Well...Woke up today 35. Time goes so fast," he said. "I haven't fought for over a year now, so just want to say I officially retire from boxing today.''

Arthur's 13-year career boasted a record of 31 wins and three defeats in 34 fights.

Speaking on BBC Radio Scotland, Arthur said: "I always told my family I wouldn't fight past my 35th birthday and that's today.

"I thought the time was perfect and on my terms. I will always be involved in boxing and have been in it for 24 years; it's been my life.

"Of course, I've got to give something back.

"I can't motivate myself any longer for small, non-championship fights. So, I just think the time was perfect and it's on my terms.

"The career highlight for me is the Commonwealth Games; to win that gold medal for my country and myself was definitely my greatest achievement."

The Scot's career in the paid ranks began in late 2000 two years after his Commonwealth Games gold success in Kuala Lumpur and within two years he had won IBF and WBO inter-continental belts at super-featherweight.

Victory over Steve Conway in October 2002 for the British title at the Braehead Arena in Glasgow completed a trio of belts in only 13 professional bouts.

Two defences of his British strap, the latter against fellow Scot Willie Limond, were sandwiched between yet another inter-continental title, this time the WBA's version.

His first taste of defeat came at the hands of Michael Gomez in his home town, when he was knocked down three times and lost his British and WBA inter-continental titles at Meadowbank.

It was in that same venue that he regained his British title, stopping Glasgow's Craig Docherty in nine rounds in April 2005.

Later that year, he added the European and Commonwealth titles, again at super-featherweight, and, for the second of those belts, inflicting the first defeat of Ricky Burns's career.

Arthur took his achievements to a new level six years ago when he landed the interim WBO world super-featherweight title by stopping the Georgian Koba Gogoladze in the 10th round and defending it in Edinburgh against Lancashire's Stephen Foster.

His next fight was meant to be against the world title holder Joan Guzman but the Dominican elected to move up to lightweight and so Arthur was recognised by the WBO as the full world champion.

Those bouts were the high point of the Scot's career as he struggled with his fighting weight.

His only bout in 2008 was a unanimous points defeat by Nicky Cook in Manchester and the loss of his world title.

Moving up to lightweight in 2009, Arthur, now a less gaunt figure, demolished Mohamed Benbiou in 93 seconds at Bellahouston in a non-title bout but, in truth, that result suggested a mis-match more than the rejuvenation of his career.

He lost his next bout that year on points to Nigel Wright in Newcastle and, although four wins followed, it was clear his impressive career was winding down.