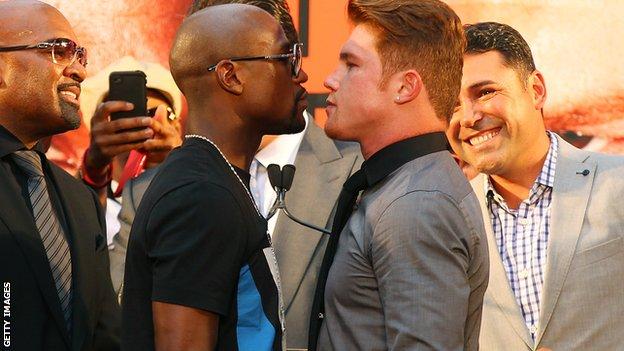 Unbeaten Floyd Mayweather Jr and Saul Alvarez were involved in a minute-long stare down as they began an 11-city promotional tour in New York for their much-anticipated clash on 14 September.

"I want to continue to rack up victories," Mayweather said.

"I've been world champion for 15 years so I know what it takes."

Alvarez, nicknamed 'Canelo' or 'Cinnamon' because of his distinctive red hair, is undefeated in 43 contests and has won 30 fights with knockouts having made his professional debut aged just 15.

The Mexican has been competing at light-middleweight for the last three years but despite the division's titles being on the line in this unification bout, the fight will be at a catch weight two pounds below the 11-stone limit.

There remains some debate over who set the catch weight, with Mayweather's camp saying Alvarez's people brought it up first.

"It wasn't me," Alvarez said. "I don't want to fight two pounds below my weight."

Mayweather, who has won world titles in five different divisions, currently operates at both light-middleweight and welterweight.

The American defended his WBC welterweight title with a comfortable unanimous points decision over Robert Guerrero in May.

However, Alvarez is expected to give Mayweather one of his toughest fights yet and tensions were high at the news conference on Monday.

"The Earth is my turf," Mayweather added. "You can put me in any ring and I will always come out victorious."