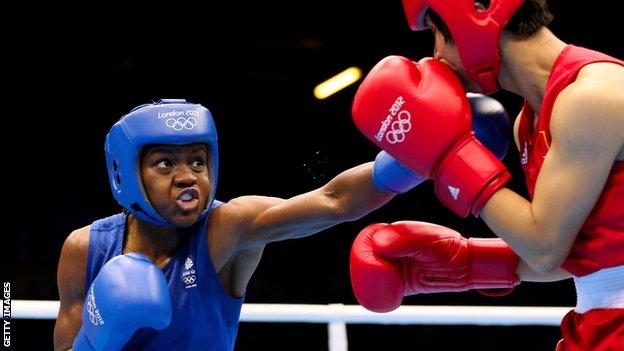 Olympic champion Nicola Adams is to make her first competitive appearance since claiming gold at London 2012.

Adams, 30, will box for England at the European Union Championships - where she is the -51kg defending champion - in Hungary, starting on 1 July.

The Leeds-born fighter has been out of action since having surgery on her right hand at the end of last year.

She became the first woman ever to gain an Olympic boxing gold medal when she won the flyweight title in London.

Adams said: "The time since winning the Olympic gold has been an absolutely fantastic experience. But it is now time to get back to business and I am really looking forward to stepping back into the ring and competing again.

"There are still so many things I want to achieve as a boxer and defending my EU title is the start of the next phase of my career."

The European Union Championships, taking place in Keszthely, will mark the first time Adams has boxed competitively since she defeated Ren Cancan of China in the Olympic flyweight final.

Adams will perform alongside three other members of the Team GB Boxing's Podium squad - the group of elite amateur fighters considered to have to potential to win medals at major international events.

Those fighters include two of Adams' London Olympic team-mates - Natasha Jonas and 2012 middleweight world champion Savannah Marshall - along with Lisa Whiteside, who joined the Podium squad in April.