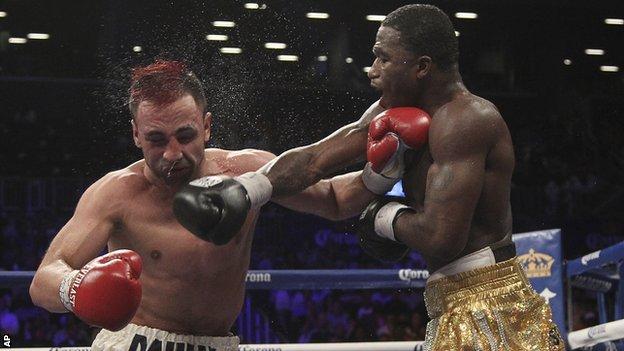 Paulie Malignaggi lost his WBA welterweight title after being beaten by Adrien Broner in New York.

Broner, 23, stepped up two weight divisions for the all-American contest and is now unbeaten in 27 fights.

"It's a tremendous accomplishment," he said. "Who's doing it like me in the game? Nobody."

The fight could have went either way. I don't think he did enough to take the belt from the champion

Broner, who has also held the WBC world title at lightweight and WBO belt at super-featherweight, went past 10 rounds for the first time in his career as he joined Roberto Duran, Roy Jones Jnr and Robert Guerrero in winning a world title in their first bout after moving up two weight classes.

"Paulie fought exactly how I thought he was going to fight," added Broner. "Once he saw my power, he got on his bicycle and I had to cut him off the whole fight.

"I didn't have to use my footwork. He ran. All I had to do was cut off the ring. He couldn't hit me. He was shadow boxing."

Malignaggi, 32, was making the second defence of the title he won from the previously unbeaten Vyacheslav Senchenko, who in turn sent Britain's Ricky Hatton into retirement last December.

Malignaggi's record now reads 32 wins and five defeats from 37 professional fights and he was unhappy at the judges' decision.

"That was disgraceful. This was a close fight," said Malignaggi.

"The fight could have gone either way. I don't think he did enough to take the belt from the champion.

"I thought I worked him. He was sharp in his shots, but he wasn't busy. He didn't land a lot of the shots he was taking."