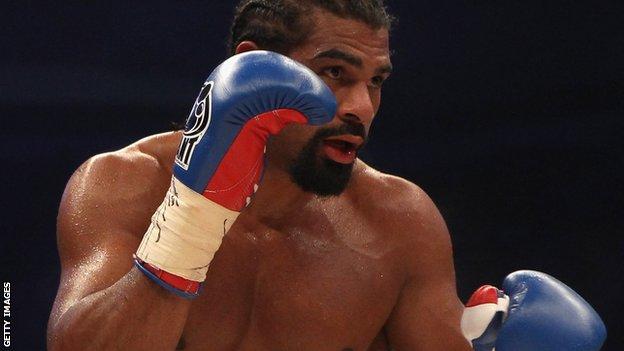 David Haye's co-promoter Eddie Hearn is confident a deal will be secured to set up a clash between the Londoner and British heavyweight rival Tyson Fury.

Hearn says Haye's manager Adam Booth and Fury's promoter Mick Hennessy are "close" to agreeing a deal with late September a proposed date for the bout.

"No contracts have been signed but my gut feeling is that it will happen," Hearn told BBC Sport.

Hennessy Sports have yet to confirm that negotiations are on-going.

"There is a lot of money involved if this fight can happen," Hearn added.

Newspaper reports have suggested that both boxers could earn up to £5m each if the bout goes ahead.

Haye has not fought since his fifth-round stoppage win over Dereck Chisora in July 2012.

The 32-year-old Londoner withdrew from a June date with Manuel Charr because of a hand injury sustained in training.

However, the former WBA heavyweight champion would be ready for September if a deal can be struck with Hearn keen for the bout to be staged in a large-capacity arena.

"There are few arenas in the UK that could actually stage this fight but the date that has been mentioned is near the end of September," Hearn said.

Former WBA, WBO and WBC cruiserweight champion Haye, who has two defeats on his 28-fight record, retired in October 2011 following defeat by Wladimir Klitschko before reversing his decision in order to meet Chisora in 2012.

Haye signed a long-term deal in April with the Hearn-run Matchroom Sport to co-promote his fights alongside his own Hayemaker Promotions and manager Booth.

Fury's last outing was in April when he earned a spectacular seventh-round stoppage win over with American Steve Cunningham in New York.