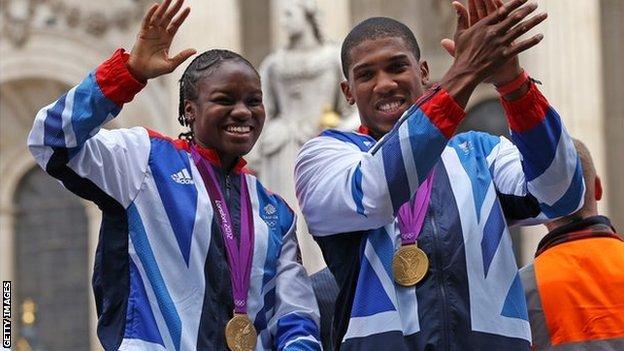 UK Sport, the government agency that funds elite sport, has backed down on its threat to redirect boxing's £13.8m Olympic funding away from the British Amateur Boxing Association (BABA).

The threat arose when Derek Mapp was ousted as BABA's chairman last month.

UK Sport suggested it may have to bypass BABA entirely, and use a "special purpose vehicle" to channel lottery-funding directly to the boxers.

But subsequent talks with BABA's board has allayed the agency's fears.

The sport's allocation for the Rio Olympics in 2016 will continue to go through BABA, subject to a standard review in December.

There was, however, a word of caution for boxing from UK Sport.

"Acceptance of these changes is only the first step, albeit a significant one, in starting to rebuild the confidence of UK Sport in how the sport is currently being governed," it said in a statement on Tuesday.

"Should these issues resurface in the future, UK Sport will not hesitate in renewing its plans to channel its funding through an SPV, in the best interests of the athletes and World Class Programme."

Mapp had been instrumental in bringing the home nations together under the BABA umbrella in the aftermath of the Beijing Olympics, and the newly integrated Great Britain set-up enjoyed its most successful Games at London 2012.

A return of three golds, a silver and a bronze unlocked record funding increase to £13.8m for the next Olympics in Rio.

But this came with strings attached, one of them being the continued good governance of the Sheffield-based programme.

This looked highly questionable in the immediate aftermath of Mapp's exit, when the amateur boxing associations of England and Scotland teamed up to remove him.

Mapp's relationship with the Scots had become particularly strained, with Amateur Boxing Scotland saying it had no access to BABA's coaches and resources, and the total focus on the elite end of the sport was damaging the grassroots.

UK Sport set BABA a deadline of 10 June to address its governance issues and it appears it has satisfied the agency.

UK Sport added that it will now lead the process to find a replacement for Mapp.