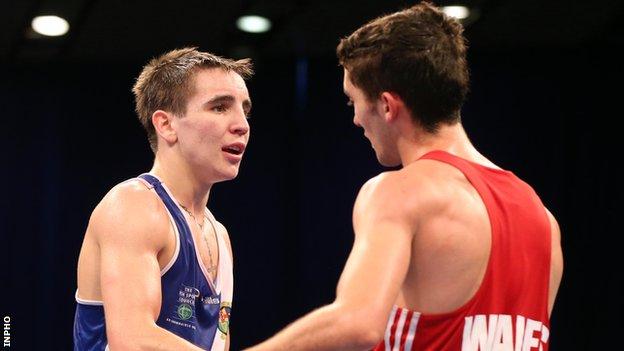 Belfast boxer Paddy Barnes was denied a chance to win gold at the European Championships due to a fractured nose.

Barnes was due to fight in the light-flyweight final on Saturday but his Russian opponent David Aryapetyan will receive the gold medal on a walkover with Barnes getting silver in Minsk.

Michael Conlan lost the flyweight final on a of Wales on Saturday.

John Joe Nevin secured Ireland's first gold medal on finals day in Belarus with a unanimous win over Mykola Butsenko of Ukraine in the bantamweight final.

Barnes, the 2010 European champion, was disappointed not be allowed to contest the light-flyweight final but admitted the right decision had been made.

The 26-year-old's nose was bleeding in Friday's semi-final victory over Salman Alizada of Azerbaijan and he needed attention from the ringside doctor during the bout.

"I am devastated I couldn't fight today," he said.

"I couldn't enter the last European Championships (in 2011) because of injury so I am gutted I couldn't defend my title this time.

"I had to get an X-ray after the last fight and it (nose) was sore, very sore.

"To be honest I think it was broken in my first fight and it kept getting worse.

I think it was broken in my first fight and it kept getting worse. I'm stupid, I would have fought on, but I think the right decision was made in the end

"I'm stupid, I would have fought on, but I think the right decision was made in the end.

"I didn't want to damage it and hurt my progression towards the World Championships."

Irish head coach Billy Walsh explained that following a meeting with Barnes, they decided he should withdraw.

"The safety of our boxers is more important than gold medals," said Walsh.

Conlan had no complaints about his narrow defeat by Selby, the number one seed, who has beaten him in three major tournaments.

The Welsh man was always in control of their bout and Conlan said: "It was a very tough fight, I knew it would be all along.

"He is world class, he is world number one but I was happy with the fight."