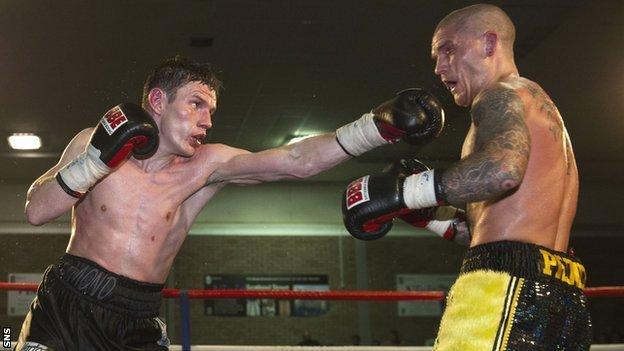 Willie Limond defended his Commonwealth light-welterweight title against Mitch Prince with a unanimous points win in a pulsating encounter in Glasgow.

The 34-year-old, , had Prince down in the first explosive round.

However, the Glaswegian found himself in a thrilling 12-round battle against the brave challenger from Cumbernauld.

Limond's next defence could be against Aberdeen's Lee McAllister, who vacated the title last year, but he will not want another night like this.

Prince had decent support inside the Bellahouston Sports Centre but at first he looked out of his depth against a master tactician.

After Limond sent him to the floor, Prince's chin was tested to the full as the champion unleashed a series of vicious, accurate blows which threatened to end the fight early.

Prince came out gamely at the start of the second round but Limond's strong defence kept him out trouble and he was landing the cleaner punches in the clinches.

The challenger's bravery was not in doubt. He was throwing plenty of punches but he was still on the wrong end of the better shots.

The fourth round was a cracker, with Prince the busier and Limond, for the first time in the fight, beginning to look uncomfortable.

A stinging right hand by the technically superior Limond at the end of the next round, equally pulsating, took Prince's gum shield out of his mouth as the roar of the crowd peaked again.

This was two boxers refusing to take a backward step, especially the challenger who charged forward with the heart of a lion and apparently a chin of granite.

Limond tried to use his experience to slow the pace at times and slip some wild shots but he knew he was in a battle.

The champion's punches continued to be the more accurate and stinging, particularly some of his left hooks, but Prince was walking through them and he came back again with a good eighth round which saw him find the target himself.

Prince looked the fresher as the fight entered the final few rounds and with impressive aggression and energy he continued to stalk Limond.

Both boxers again swapped punches in the 11th round as the fans cheered them on.

The final round was typically exciting. Limond, summoning up some last reserves of energy, found the target several times before he was given the decision, one he would have been glad to be awarded.