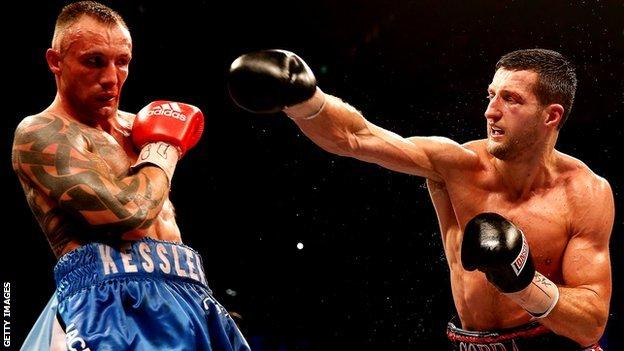 A third fight between IBF super-middleweight champion Carl Froch and Mikkel Kessler is a possibility, according to promoter Eddie Hearn.

And Hearn insisted a decider would be compelling: "Commercially, Froch v Kessler III is just a huge fight.

"The first two were stunning nights. We will give Mikkel time to see if he wants to go again."

The 2010 contest in Denmark also went the distance, and after his win in London Froch hinted at a third fight.

The only other boxer to have beaten Nottingham-based Froch is WBA champion Andre Ward, who emerged the clear winner when the pair met in Atlantic City in December 2011.

Hearn rebuffed suggestions from the American's camp that any rematch would have to take place in the United States.

"I have made contact with Ward's promoter and we are ready to begin discussions with them," he said.

"For us, the fight would have to happen wherever it would make the most financial sense and that's the UK."

Either rematch could take place this winter, while it seems increasingly likely that an all-British contest with George Groves may be scheduled for 2014.

"It's time to start looking to the future," said Hearn. "We will look to fight this winter and then lead into a big stadium fight next summer."