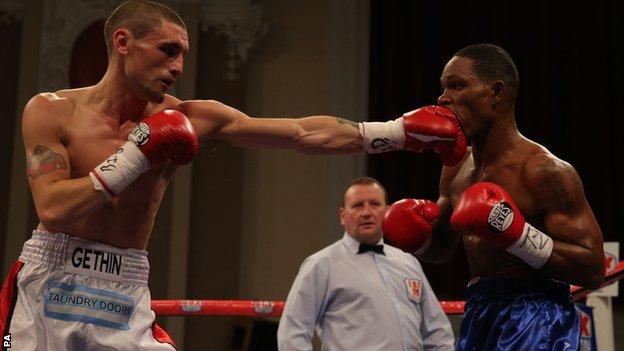 Britain's Martin Gethin was stopped by Ammeth Diaz in the seventh round of his IBF lightweight title final eliminator fight in Walsall.

The 29-year-old put in a brave display but was outclassed by the Panamanian.

Diaz started well but Gethin fought back and hurt his opponent in the fourth with a powerful left uppercut.

However, Diaz put the Briton down in the sixth and, after taking his third count of the fight, Gethin retired in the seventh.

Martin Gethin lost three fights in a row between 2008 and 2009 and nearly quit the sport before returning and fighting his way towards this world title eliminator against Ammeth Diaz.

Diaz, who stretches his record to 32 victories from 44 fights, will now have a second crack at Mexican Miguel Vazquez's world title after losing their first bout in Guadalajara in 2012.

It was an impressive and slick performance against Gethin, who started on the front foot but was always susceptible on the counter.

Diaz appeared in complete control by the third when two solid rights found their target but Gethin's jab was always a danger.

The Englishman improved in the fourth and, after a solid left had pinned Diaz on to the ropes, a superb left uppercut hurt the Central American.

Gethin, who has now lost four times in 29 contests, could not find the shot to finish his opponent and Diaz responded well in the sixth with a crunching right which appeared to break Gethin's nose.

There was only one winner from that point as Gethin, who won the British title in January, twice more fell to his knees in the seventh, the final one proving decisive as the referee stepped in.