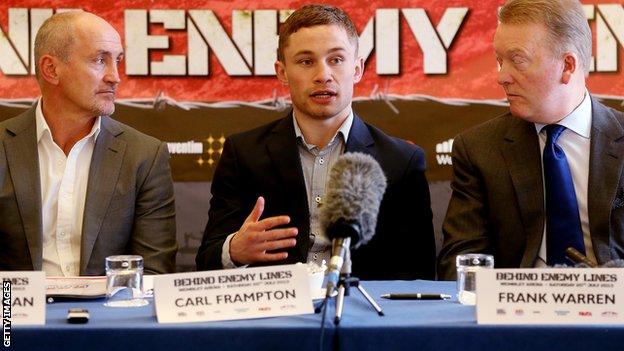 Frampton, 26, is to fight on 20 July at Wembley Arena on a bill promoted by Matchroom's rival, Frank Warren.

Matchroom said they had severed ties as a potential conflict of interest had arisen with the Northern Irishman's manager, Barry McGuigan, also wanting to be his joint-promoter.

On Friday, Frampton and McGuigan will be in Belfast for a news conference.

After that, the highly rated fighter's next three bouts will be staged in his home city of Belfast. It is hoped the second or third of that series will be for a world title.

"I am really excited. It is a great opportunity and they have said I will be a priority," said Frampton.

"It is up to me to keep winning and doing what I am doing."

In Matchroom's statement on Thursday, Hearn indicated he was unwilling to share promotional work with former world champion McGuigan.