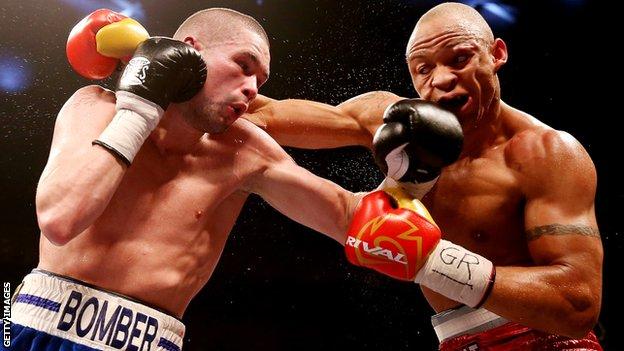 Tony Bellew won his final eliminator for the WBC world light-heavyweight title as he clinched a unanimous points win against Malawi's Isaac Chilemba.

I will fight until I've not got anything left. You have to put me on the floor to beat me

Bellew made a bright start and excelled with the jab to take the early rounds, but grew frustrated with Chilemba's spoiling tactics.

The pair had fought out a draw in Liverpool in March and Bellew admitted he had been motivated by the criticism he had received after that contest.

"I've been through hell and I've tortured myself since the last fight," he said.

"I've had to put up with some stick with people doubting me on forums and on Twitter, but everyone questioned the wrong person.

"I went straight back into training camp and I've hated boxing these last eight weeks.

"The difference this time was I wasn't dead on my feet after seven rounds like I was before when I was lucky not to go out on a stretcher.

"But I will fight until I've not got anything left. You have to put me on the floor to beat me. I'm just so happy. I stuck with it and he didn't want it."

It was only the second defeat of 26-year-old Chilemba's career but Bellew, who has won 20 of 22 professional contests, is now ready to move up for a world title shot.

He is now the mandatory challenger for the WBC title and is expected to fight the winner of the Dawson v Stevenson bout, which takes place in June.

Groves claimed the 19th victory of his professional career and took the vacant WBA intercontinental super-middleweight belt as he outclassed Uruguayan Gonzalez.

The Londoner dominated from the opening round and put his opponent down in the fifth round with a powerful short, straight right-hand that landed on 34-year-old Gonzalez's chin.

Gonzalez, losing for only the third time, beat the count but referee Terry O'Connor stopped the contest.

"I'm only ever happy after a perfect performance and I don't think I will get that," said Groves.

"I controlled it and my only mistake was trading recklessly at the start. But my shots were landing and it was a case of wearing him down before I landed the sweet shot that put him away."