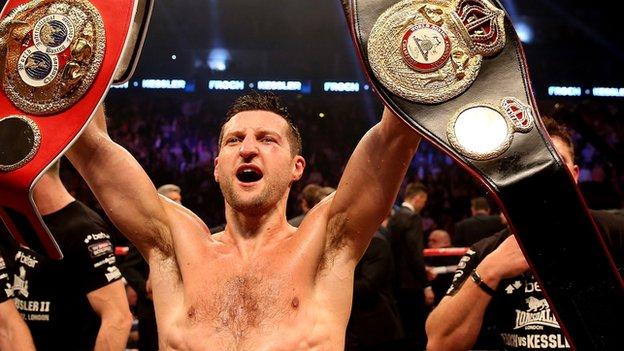 The Nottingham fighter started faster but his Danish rival, who beat Froch in Denmark in 2010, found his feet in the middle rounds.

But Froch, 35, kept his head and marginally had the better of some barbaric rounds down the stretch.

"It was an absolutely sensational fight, we will never see that again. I thought the referee was about to step in at one point but Froch dug deep.

"Both had to dig deep, you never thought Kessler was going to come back after those first three rounds but he did and then Carl had to recover after Kessler had a good spell.

"Froch was second to none. In the first round you thought Carl was on top and then Kessler found something forcing Carl to dig deep.

"But whenever questions were asked of Carl he found the answers."

"It feels really good," Froch said. "The only thing that feels bad is that I have had to beat such a real gentleman, a real warrior and real nice man.

"He did hurt me a couple of times; I think everybody saw that," he told Sky Sports. "But I hurt him a little bit more and I thought I deserved the win. I thought it was unanimously my fight.

"I was close to getting the stoppage towards the end but, when I went in for the finish, what did he do? He fought back with a couple of big, hard shots. Big respect to him."

His victory could pave the way for a rematch with American Andre Ward, who outclassed and outpointed the Englishman in Atlantic City in 2011.

Ward, the WBA title-holder, was ringside at the O2 but Froch and Kessler, 34, could go again, given the barbaric and dramatic nature of their two fights so far and the fact they are so evenly matched.

While Kessler had only boxed 13 rounds since outpointing Froch in their first fight, Froch had fought five times, including last year's thrilling demolition of Canada's Lucian Bute.

And Kessler started slower, although Froch probably stole the opening round with a couple of flurries late on.

If some of the verbal exchanges in the build-up were trashy and the atmosphere before the first bell was electric, the first two rounds were relatively cagey.

Froch continued to control the centre of the ring in the second, keeping Kessler at bay with his jab and landing with a snappy left-right combination that caught his rival off-balance.

Kessler had some success with his jab in the third but Froch also landed with a crisp left hook and it looked like another round for the Englishman.

The Dane came into the fight in the fourth, demonstrating the speed he is renowned for and repeatedly beating Froch to the punch with his jab.

And the fight came alive in the fifth, with Kessler landing with two looping left hooks and bringing Froch to a standstill with a flurry of blows on the bell.

Kessler rocked Froch with a thunderous left-right combination at the start of the sixth and as the round progressed it appeared the Dane had gained control of the contest.

Froch got the better of some furious exchanges in the seventh as the 20,000 capacity crowd warmed to the action but they had not seen anything yet.

Kessler landed with a booming overhand right early in the eighth only for Froch to retaliate with a couple of rights of his own and stiffen his opponent with a sickening left-right combination.

By the ninth the fight had settled into a grim rhythm, with the pendulum swinging back and forth, but Kessler did the smarter work, making Froch grimace with a couple of stabbing blows to the body.

Froch probably nicked a ragged 10th courtesy of his superior work-rate but the Dane took the 11th, hurting his rival with some slick and heavy-handed combinations and paving the way for a grandstand finish.

The final round was a classic, with Froch mercilessly stalking his prey and Kessler hanging on for dear life when the final bell sounded.

If not Ward or Kessler, Froch, who improved to 31 wins and two defeats in 33 professional fights, might be tempted into a bout against American legend Bernard Hopkins, who defends his IBF light-heavyweight title against Karo Murat in July.

Kessler, whose only other losses in a 49-fight career, were against Welsh great Joe Calzaghe in 2007 and Ward in 2009, said he might retire if he lost to Froch but he might now be persuaded to change his mind.