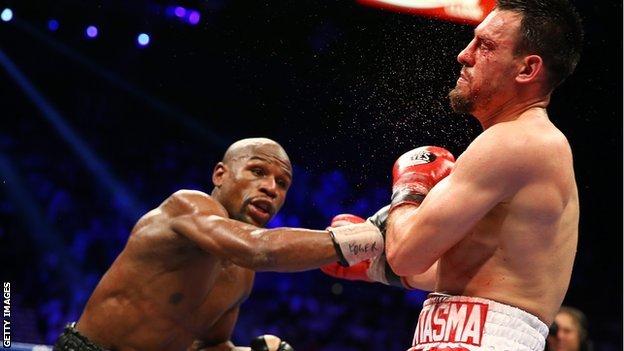 Floyd Mayweather Jr won his 44th consecutive fight, with a unanimous points decision over Robert Guerrero at the MGM Grand in Las Vegas.

It was the WBC welterweight champion's first fight since

In that time, he served two months of a three-month prison sentence

All three judges scored the bout 117-111 in Mayweather's favour, inflicting Guerrero's second loss as a pro.

With Mayweather, 36, unable to defend his title due to the prison sentence, Guerrero, 30, was the WBC's interim champion.

But Mayweather landed 195 punches to Guerrero's 113, connecting with big blows in the fifth and eight rounds.

"We did it again. I take my hat off to Robert Guerrero,'' Mayweather, who was paid £20.5m, said after the fight.

"I feel bad I didn't get the knockout tonight that the fans wanted. I was still trying to go for the knockout but it didn't happen."

"I landed some good shots on him," Guerrero said. "He's a great fighter. He's slick and quick."