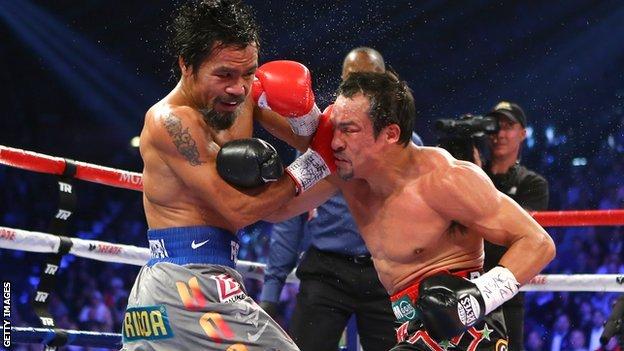 Former seven-weight world champion Manny Pacquiao plans to fight again in September, but not in the United States because of tax reasons.

A spokesperson for the boxer said negotiations are ongoing for a rematch with Juan Manuel Marquez, who knocked out Pacquiao in December.

Singapore, Macau and Dubai are possible venues for Pacquiao's next outing.

Pacquiao, 34, is running for re-election as a congressman in next month's Philippines mid-term elections.

"We will talk about the opponent and the place after the 13 May elections," said Rose Tamayo.

Last June, Pacquiao lost his WBO welterweight crown to American Timothy Bradley on a controversial decision before being knocked out in spectacular fashion by Marquez.

The defeats prompted calls for him to retire, but Pacquiao has consistently signalled his intention to keep on fighting.

Marquez would be the obvious opponent for his September comeback, with Pacquiao leading their four-fight series 2-1, with one fight drawn.