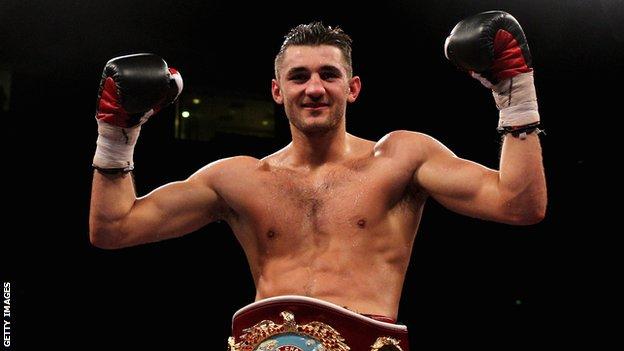 WBO light-heavyweight champion Nathan Cleverly can earn a bout against Bernard Hopkins this summer if he beats Robin Krasniqi in a delayed mandatory bout on 20 April at Wembley Arena.

"I have got to perform like a world champion because he is in my way," Welshman Cleverly, 26, said.

Cleverly was originally due to meet 25-year-old German Krasniqi in April 2012.

"This is a very important fight," promoter Frank Warren said.

"Nathan can't afford to slip up because if he does, any potential fight against Bernard Hopkins will go out of the window."

Dereck Chisora's comeback fight is also on the bill at the Rule Britannia event, after the Londoner regained his boxing licence. He was stripped of it after a brawl with David Haye in Munich following a world title fight defeat by Vitali Klitschko.

The 29-year-old lost a resulting fight with Haye at Upton Park last summer, with both competitors fighting under licence by the Luxembourg Boxing Federation.

Having met with the British Boxing Board of Control, Chisora joked: "It was all tea and biscuits with the board - I told them I was taking my medication."

Chisora's opponent has not been named for the April fight and could, if successful, then face British and Commonwealth heavyweight champion David Price.