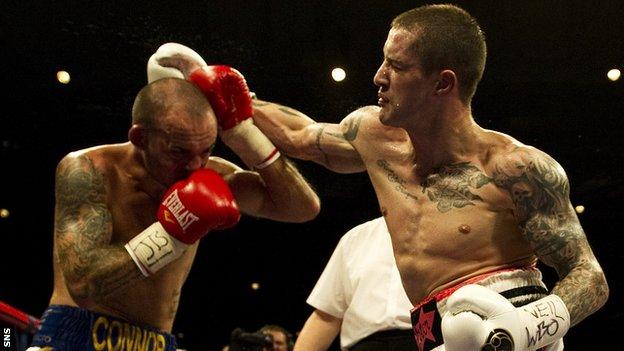 The Coatbridge fighter split from Frank Warren after the postponement of a world unification bout with IBF title-holder Miguel Vasquez.

Burns' manager Alex Morrison has earlier this week confirmed to BBC Scotland that Ricky was "considering his options".

Morrison thought his fighter had been shown a lack of respect, but refused to be drawn on speculation linking him with Hearn.

Hearn himself though hinted Burns will reject all other advances and sign with him, tweeting: "We will announce our latest major signing at 1pm on Monday at a press conference at Grovesnor House."

American giants Golden Boy Promotions were rumoured to be one of the other interested parties, but chief executive Richard Schaefer has denied any approach.

He told World Boxing News: "We haven't made any effort to talk to Ricky Burns.

"He is still under contract to Frank Warren and a fighter cannot simply declare that they are free and then the next day sign with another promoter.

"Also, I am not in the business of stealing other promoter's fighters."

Burns has not fought since defeating Kevin Mitchell inside four rounds in September.

He saw planned fights with Liam Walsh and Jose Ocampo scrapped in December, but was due to face Vasquez at Wembley on 16 March.

The fight was postponed until 20 April after Vasquez's camp announced he had a stomach bug, but that fight now looks in doubt after Burns' rift with Warren.