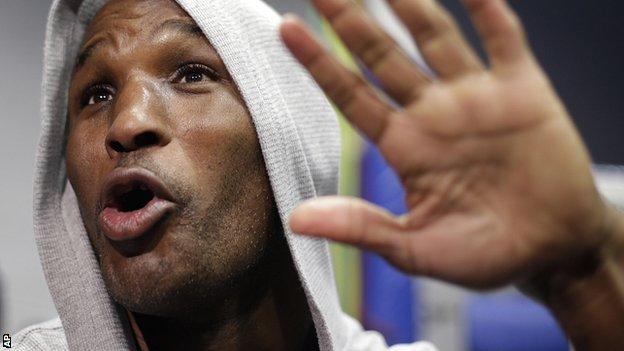 Bernard Hopkins hopes to finish the career of promoter Don King when he challenges Tavoris Cloud for the IBF light-heavyweight crown on Saturday.

The 48-year-old Hopkins, who is bidding to break his own record as the oldest fighter to win a world title, was once promoted by 81-year-old King.

The understated Cloud is currently King's most high-profile fighter.

"What a way to put the last nail in the coffin. Who thought it would be me that would shut him down?" said Hopkins.

King, whose first major promotion was 'The Rumble in the Jungle' between Muhammad Ali and George Foreman in 1974, was defiant in the face of Hopkins's taunts.

"This company has been here for 45 years," said King. "I love Bernard. He's not a nemesis to me."

The 31-year-old Cloud, who is undefeated in 24 fights, is making his fifth title defence and is confident of keeping his crown.

"He could be ripe for the picking. We'll know once he gets hit a couple of times."

Former middleweight great Hopkins was 46 in 2011 when he beat Canada's Jean Pascal to win the WBC light-heavyweight crown, beating Foreman's mark of 45.

"I'm not counting age. Everybody else is counting it," said Philadelphia's Hopkins, who has won only one of his last four bouts.

"People are trying to use my age as something that is a death sentence. I've been hearing 'old' since I was 35."