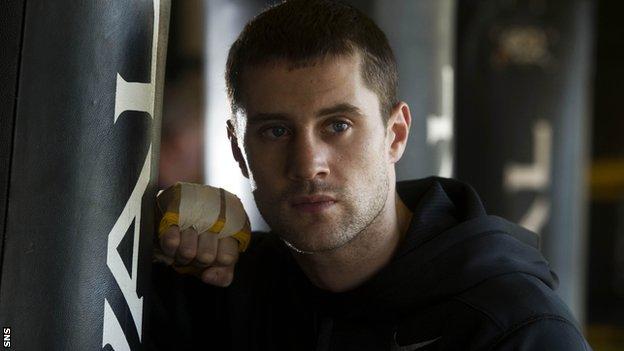 Morrison refused to be drawn on speculation that Burns would join rival promoter Eddie Hearn.

Burns was left frustrated after the postponement of his world unification title fight against IBF title-holder Miguel Vasquez.

The fight against Vazquez was scheduled to take place in London on 16 March but the Mexican pulled out with a virus.

We had to do something to stop Ricky stagnating

Warren said the fight would take place on 20 April but Morrison told The Scotsman on Thursday: "I doubt very much that fight was ever going to happen".

"I regret it has come to this because I have known Frank for nearly 40 years," added Morrison. "But it has to be for Ricky's sake. I felt we had to do something to stop Ricky stagnating."

Burns, 29, also suffered the cancellation of his previous title defence when opponent Liam Walsh was forced to withdraw after a car crash.

Englishman Walsh was replaced by Filipino Jose Ocampo, who subsequently pulled out after the death of his trainer.

Commonwealth super-middleweight champion George Groves was also on the Wembley bill but withdrew and has since joined Hearn's Matchroom stable.

The departures of Burns and Groves leaves Warren with Wales' WBO light-heavyweight champion Nathan Cleverly as the most high-profile fighter on his books.

Cleverly was also supposed to fight on the Wembley bill but his planned defence against Robert Krasniqi was postponed.

Other fighters to have moved from Warren to Hearn in recent years include Sheffield welterweight Kell Brook and Liverpool light-heavyweight Tony Bellew, while former Olympic champion James DeGale left for Mick Hennessy.