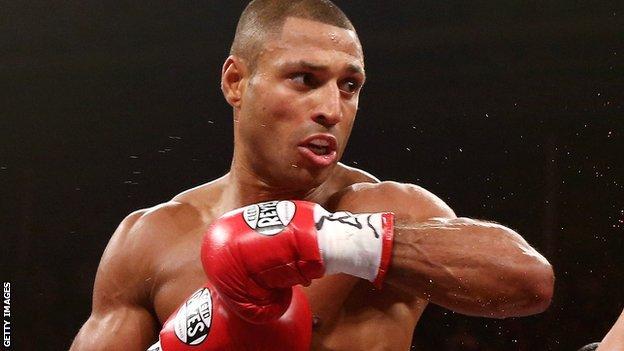 Kell Brook is relishing being the underdog for his world title fight against Devon Alexander on 23 February.

The pair were scheduled to fight this weekend until an ankle injury suffered by Brook forced a postponement.

"I'm going over to his backyard but I wouldn't want it any other way. Taking his title off him on his own patch is going to feel so good," said Brook.

Unbeaten Brook will put his perfect 29-0 (19 KOs) record on the line when he travels to the United States for his maiden world title tilt.

Some bookmakers see the fight as even but many experts predict the younger but more established Alexander will have too much for the British challenger.

"It's the first time in my career I've been the underdog but it doesn't matter to me," said Brook, the former British title-holder.

"He's the champion and people are expecting him to keep the title but we know differently. I'm going to show him - and the world - why people call me the 'Special One'.

"The ankle is fantastic now, I'm fully prepared and fully healed. The injury has helped me because it's given me more time to get prepared.

"I've got to do whatever it takes to win, whether I make it a dogfight or a technical fight. Whatever happens in that ring, the job will get done."

The 25-year old Alexander has won 24 of his 25 bouts, with 13 knockouts, and is a two-weight world champion.