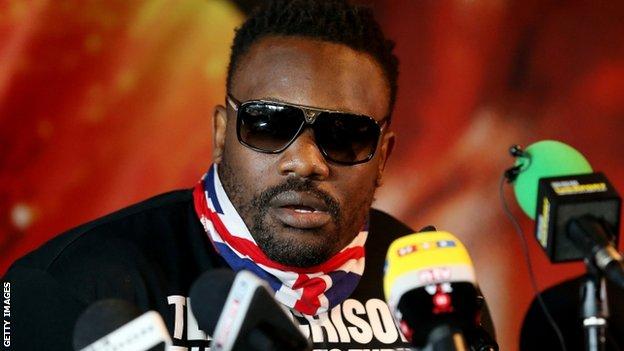 Dereck Chisora is confident he will get his British licence back after he was named on the undercard for Ricky Burns's world title fight in March.

Chisora's licence was revoked by the British Boxing Board of Control (BBBC) following his post-fight brawl with David Haye last February.

Haye won when the pair met in the ring in London in a fight sanctioned by the Luxembourg Boxing Federation last July.

"We will get this licence," claimed 29-year-old heavyweight Chisora.

The fight in London on 16 March, against an unnamed opponent, is dependent on whether the BBBC return the licence to the Zimbabwe-born fighter.

Chisora threatened to shoot Haye when the pair clashed shortly after Haye's defeat by Vitali Klitschko in Munich.

Haye subsequently stopped Chisora in the fifth round of their meeting at Upton Park in July, but Chisora is convinced that he has made enough progress for the BBBC to now grant him his licence.

"We have done a lot of work. We have done some lessons. It's all good now," Chisora added.

"Last year is the past. Now is 2013 and we will move on in a good way. We are just going to continue the career now. I am feeling a million dollars.

"I want to put (the Haye) episode to bed, that's what I want to do. We will get this licence, get the fight out of the way and then we will move on to something else."