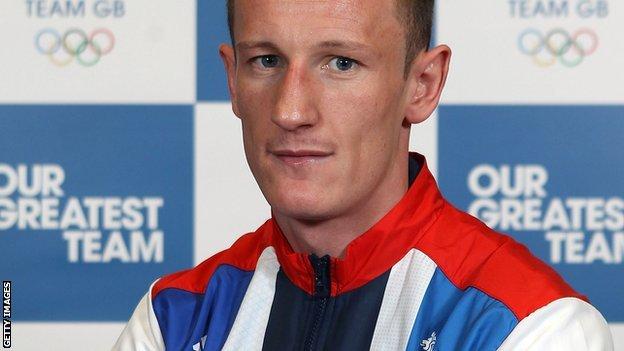 Tom Stalker, who captained the Great Britain boxing team at the London Olympics, is to turn professional.

Stalker, 28, has signed a contract with Eddie Hearn's Matchroom Sport and will make his debut next month.

Light-welterweight Stalker's second fight will be at the Liverpool Echo Arena on 30 March, when fellow Liverpudlian Tony Bellew will headline.

Bellew is set to face Isaac Chilemba of Malawi in a final eliminator for the WBC light-heavyweight title.

"I feel I am going to be exciting to watch as a professional boxer," said light-welterweight Stalker.

"I have done everything I could possibly do as an amateur, bar winning an Olympic medal.

"Even though I didn't medal myself, as a team I have captained the most successful amateur boxing team we have ever had and that was a big thing for me.

"Since the Olympics I haven't had a goal and I have been a bit depressed, especially seeing the other lads doing all sorts of stuff.

"But now I have that hunger back and to get in that ring and fight is going to be amazing.

"It is going to be amazing for me to be boxing in front of all my friends and family in Liverpool and that is when I will really feel like a professional."

Eddie Hearn said: "Tom is one of Britain's most successful ever amateurs and we are so excited about joining forces on this journey.

"Tom has a wealth of experience and we are looking to fast track him to a title shot within 12 months. He can expect a busy year ahead, kicking off in February before fighting in front of his home crowd at the Liverpool Echo Arena in March."

Rob McCracken, GB Boxing performance director, said: "It has been very good working with Tom over the last three years, when he has shown himself to be a fine boxer with the ability to win medals at major tournaments.

"It is disappointing for us that Tom has decided his future lies away from the GB Boxing squad but he departs with our best regards and we wish him every success in his future career."

Southpaw Stalker will be trained by Paul and Mick Stevenson at Everton Red Triangle boxing club, where British flyweight champion Kevin Satchell will be a gym-mate.

Stalker is a former two-time European silver medallist and won a bronze medal at the 2011 World Championships.

He was controversially beaten in the quarter-finals at the London Games but considered joining Britain's World Series of Boxing (WSB) team and remaining amateur until Rio 2016.

Fellow Olympians Fred Evans, Andrew Selby and Josh Taylor are committed to the semi-professional WSB tournament, while Olympic champions Anthony Joshua and Luke Campbell are weighing up their options.