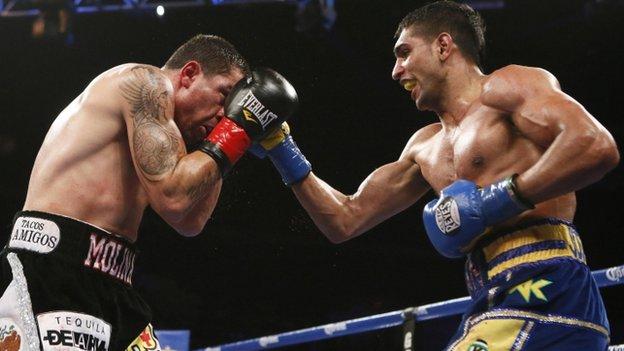 Britain's Amir Khan bounced back from two straight defeats with a stoppage of Carlos Molina in Los Angeles.

Khan, 26, lost his WBA and IBF light-welterweight titles with defeats by Danny Garcia and Lamont Peterson.

But he completely outclassed Molina, forcing him to quit on his stool at the end of the 10th round.

Khan, whose latest win was the first under the tutelage of Virgil Hunter, may now decide to go after a rematch with either Garcia or Peterson.

"I'm ready for Danny Garcia anywhere, any time, any place," Khan said. "He was lucky. He caught me with a good shot.

Khan sounded hungry for revenge immediately after his victory over Molina, but Garcia is fighting Zab Judah in February

Move up to welterweight

Unlikely to happen immediately, but fellow Briton Kell Brook challenges for a world title next year, which could lead to an all-British world title showdown further down the line

"You could see the way I was fighting, more patiently. At times he did catch me. I just composed myself, stuck with the game-plan and stayed with it."

The Bolton boxer arrived at the Memorial Sports Arena on the back of a devastating defeat by Garcia, who floored Khan three times on the way to a fourth-round knockout in July.

That followed a controversial points decision defeat by Peterson in Washington last December.

And Khan, who improves to 27 wins (19 KOs) and three losses, said his new tutor has already had a marked improvement.

"Virgil is teaching me how to understand boxing," said Khan. "If I'm using my speed properly, there's nobody in the world who can beat me.

"I get too ballsy for my own good. But now with Virgil I'm sticking behind that jab and staying patient."

But in a fight which Khan described as "make or break" for his career, the 2004 Olympic silver medallist kept his hopes of regaining a world title alive with a composed and sometimes blistering display.

The Briton was given a hostile welcome on Molina's home patch but kept his composure and was patient early on.

Moving forward in measured bursts, Khan pushed the American onto the back foot and landed the best shot of the first round, a sharp right hand that cut Molina over the left eye.

The bloodied Molina countered with a few shots of his own as Khan showed old habits die hard, rushing in and leaving his chin high.

And Khan was stiffened by a right hook in the second before steadying the ship and resuming control of the contest.

Molina simply had no answer to his rival's superior reach, hand speed and foot movement and was already out of ideas by the middle rounds.

With Molina's cut deteriorating badly and the 27-year-old taking plenty of punishment, referee Jack Reiss suggested his corner pull him out at the end of the ninth.

But Molina was sent out for more, despite it being abundantly clear that he did not have the tools to do Khan much, if any, damage.

It was more one-way traffic in the 10th as Khan started to let his hands go, after which his corner finally decided it had seen enough.

Another option for Khan would be to move up to welterweight, where fellow Briton Kell Brook, who challenges IBF title-holder Devon Alexander early next year, awaits.