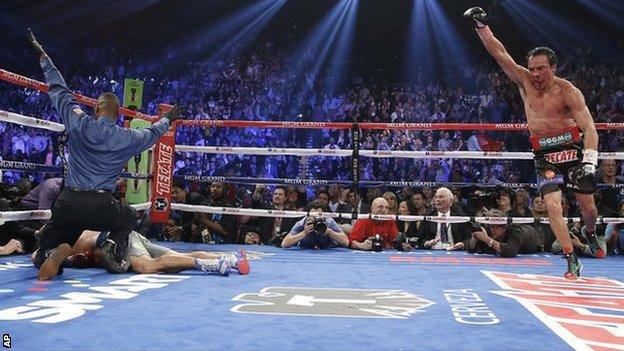 Juan Manuel Marquez delivered a devastating right hand to knock out Manny Pacquiao in the sixth round of their welterweight bout in Las Vegas.

Mexican Marquez, 39, floored Pacquiao, who lay motionless on the canvas for some time, for a first win over the Filipino in their four-match rivalry.

Pacquiao, 33, had won the previous two encounters, with one draw.

It was a second successive defeat for Pacquiao after a controversial loss to Timothy Bradley in June.

Pacquiao had already been down in the third round - the first time in 39 rounds between the two that the seven-weight world champion was knocked from his feet - after Marquez threw a short right.

But Pacquiao recovered to ground Marquez in the fifth and the pair were exchanging heavy blows in the sixth.

However, with one second of the round remaining, a bloodied Marquez threw a huge overhand right that had Pacquiao out cold before he hit the canvas under the ropes.

Pacquiao, who now has 54 wins, five defeats and two draws, did not move for about two minutes before finally being dragged to his feet by his team.

Marquez's victory will go some way to make up for his narrow points defeat to Pacquiao in November 2011, which many observers believed to be the wrong decision.

That fight - the third of their series - gave Marquez his sixth defeat of a career spanning nearly two decades.

After the fight, Pacquiao, who was leading 47-46 on all three judges' scorecards, said he will seek a fifth meeting with Marquez, who now has 55 wins, six defeats and one draw.

"Why not? It's a good fight," said Pacquiao. "I did my best. I know that I got him in the last couple of rounds but I started to be over-confident and I got hit by a solid punch. I did not expect that punch."

Marquez said: "I am not thinking about any fight. I just want to celebrate.

"Right now in my future I don't know what is coming but I am going to rest and I am going to celebrate with my family and my friends in Mexico."

Asked whether Pacquiao should continue, his trainer Freddie Roach said he would assess his charge in the gym and make a decision.

"If I see him declining in the gym and I think he's going to get hurt I'll tell him to retire and I think he will if I tell him," Roach told BBC Sport.

"He was boxing well and winning the round big and he walked into a short, picture-perfect punch."