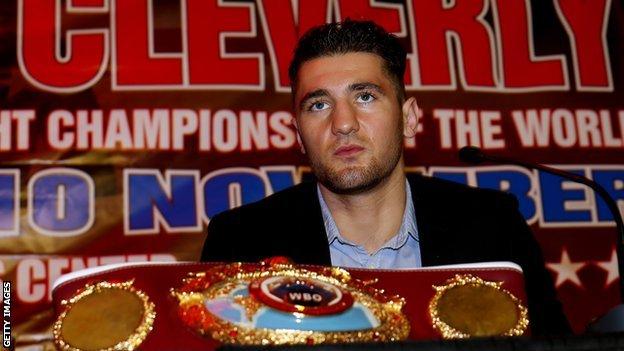 Nathan Cleverly will not defend his WBO light-heavyweight title against Ryan Coyne in America.

Coyne, who is in a contractual dispute with former agent Don King, was expected to fight the Welshman in Los Angeles on 10 November.

But the American says his legal battle has put paid to the fight and Cleverly must find another opponent.

"Much as I hate to say it, this fight will not be going forward with myself involved in it," Coyne told BBC Wales.

"This is the biggest disappointment of my career.

"I trained very, very diligently for this fight and I was devastated when I got the news.

"I want to apologise to the fans in the United Kingdom and the United States that this fight won't be going ahead, but hopefully we can get it on at a later date.

"We just have to let the managers and attorney's sort this out."

Cleverly has previously told BBC Wales he still expects to fight in Los Angeles on 10 November.

But any replacement for Coyne would have to be among the WBO's top 15 contenders for the Welshman's world title to be on the line.

German Robin Krasniqi is the mandatory challenger in the WBO rankings. A meeting with Cleverly was scuppered in April when the 25-year-old champion

Krasniqi's fellow countryman Juergen Braehmer, currently second in the WBO rankings, pulled out of a in May 2011.

If no ranked contender is found in time to face Cleverly, the Cefn Forest product faces the prospect of fighting a 10-round non-title fight at the Staples Center in his second bout in front of an American audience.