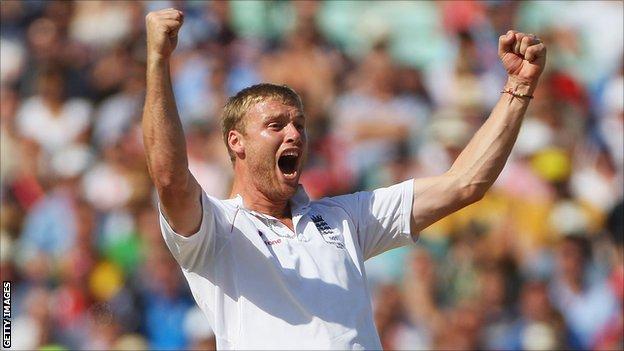 Former England cricket captain Andrew Flintoff's plan to become a professional boxer is not just for one fight, according to his trainer and former world champion Barry McGuigan.

Flintoff is planning a heavyweight fight in Manchester on 30 November against an opponent yet to be decided.

Flintoff's progress is being filmed for a television documentary, although any possible bout would depend on Flintoff being granted a licence by the British Boxing Board of Control.

The 34-year-old retired from Test cricket following England's Ashes victory in 2009 and from all forms of the game a year later, with years of injury problems finally taking their toll.

He played 79 Test matches and 141 one-day internationals for his country, and is widely recognised as one of the most successful all-rounders that England has ever produced.

"It's a huge challenge, probably the biggest I have ever undertaken, especially in such a short time-frame."

The former world featherweight champion McGuigan, 51, added: "A lot of guys feel they want to do something else. He called it quits with the cricket because he had too many injuries.

"He's always doing something. He's cycled from Athens to London for charity, he rowed the Channel with John Bishop for charity, and just last week he cycled 140 miles in honour of Tom Maynard.

"Andrew's a very fit, determined and focused individual, he wants a challenge in his life and this certainly is that.

"He's very good at throwing the right hand, he's got good feet and I was very impressed with him.

"He's a got a long way to go and it's a different story hitting a punchbag to fighting in front of potentially 10,000 people, so it's a big ask of him."