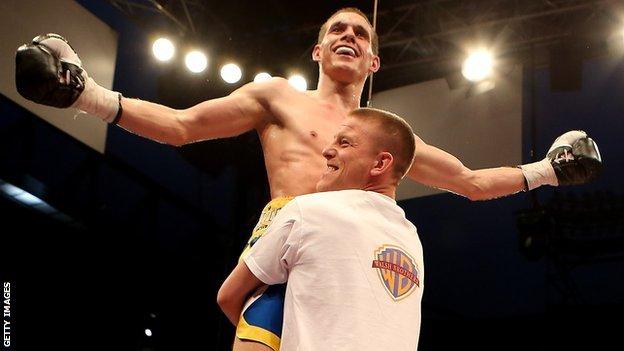 Unbeaten Liam Walsh insists he still has plenty of room for improvement despite winning the WBO European lightweight title.

The 26-year-old from Cromer stopped Italy's Dominic Urbano in the eighth round on the undercard of the David Haye-Dereck Chisora bout at Upton Park.

"I wanted to put on a really good performance, but don't think I did that," he told BBC Radio Norfolk.

"After 10 months out, in the early rounds there was a lot of ring rust."

He added: "I'm my own biggest critic - it's never good enough for me - but I built myself up for a big performance and it just didn't happen.

"I knew I was going to get him out of there but I was just getting caught with stupid shots back. My movement just didn't seem to be there."

It was Walsh's first fight in the lightweight division and his victory over a more experienced opponent improved his record to 13-0.

He could now have opportunities at two different weights as he also holds the Commonwealth super-featherweight belt, having outpointed Maxwell Awuku in October 2010.

"I felt really strong but my future still lies at super-featherweight," he said.

"I can still make the weight comfortably enough but I'm going to get a proper nutritionist on board and a strength and conditioning coach and go from there - I'm back to defending my Commonwealth next, I think.

"Winning that lightweight title just opens up other avenues and if I get offered a fight I fancy at lightweight, I can do that as well.

"It just gives me opportunities for more work, really - I can jiggle between the two.

"At some point I'll have to go up to lightweight but the close future definitely lies at super-featherweight."