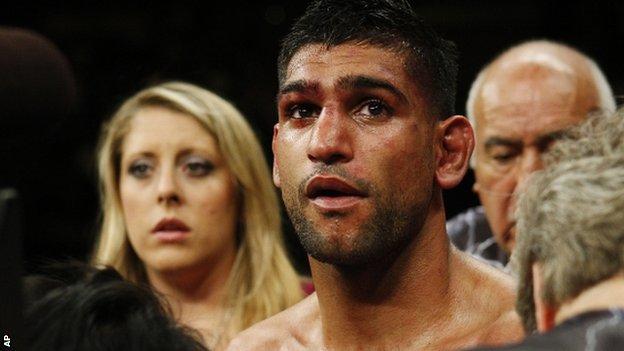 IBF super-middleweight world champion Carl Froch says he would retire if he had been knocked out like Amir Khan in his loss to Danny Garcia.

Khan, 25, was stopped in the fourth round by the unbeaten American in Las Vegas on Saturday night and has now lost his last two fights.

Britain's Froch told 5 live Sportsweek: "Khan's been knocked out by someone who is not touted for the top level.

"It's very damaging. I would retire if that happened to me."

Khan was knocked down three times as Garcia claimed the British fighter's WBA light-welterweight belt and held on to his WBC title.

After a strong start, Khan was floored in the third by a counter and could not recover from shots in round four.

Froch - who became a three-time world champion with an impressive fifth-round stoppage of Lucian Bute in May - has lost twice in his career.

But he questioned whether Khan is capable of coming back from his latest defeat.

Froch said: "People can say that I have lost twice before, but if I had lost to Bute I would have retired.

"I'm not in this sport to get beat, get knocked out and get outclassed, I'm in this game to be at the top and stay at the very top.

"It's a personal decision to retire but to get stopped in the fourth round after previously being knocked out is very damaging. It's finishing. He has found a level.

"I hope he can come back, he's got enough years left and if he has the ambition and desire to come back he could. He's a good fighter.

Can I apologise to my family friends and everyone. I got caught with a shot and I know millions of you are upset but that's boxing for you

"But this is boxing. It's a very, very tough sport."

Khan's trainer Freddie Roach said his fighter can return from the latest setback, and opened up the possibilty of a rematch with the unbeaten American.

"He's still young and people make mistakes, but this is what makes us better when we avenge things like this," Roach told BBC Sport.

"Amir told me he wants a rematch, he said he would love to have it in England, so let's see if Danny Garcia has the heart to come over there."