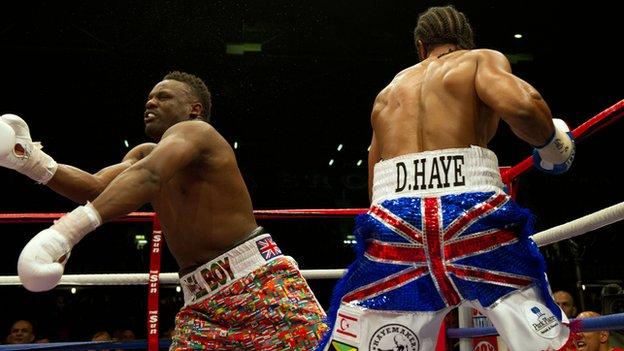 David Haye defeated Dereck Chisora with a fifth-round knockout in an enthralling contest at Upton Park.

Haye floored Chisora with a brutal left-hook, right-hand combination in the fifth.

Chisora just managed to climb to his feet but after three right hooks and two lefts from Haye the fight was over.

Earlier, Chisora had controversially rocked British rival Haye with a punch after the bell had sounded in the third round.

"As expected, Haye was too quick and too slick for the ponderous Chisora, although the manner of the victory will have surprised some. Chisora has sturdy whiskers and it took a magnificent barrage from Haye to put him away. Vitali, were you watching? But perhaps more important were the hugs and smiles after the dust had settled - this wasn't, as some had predicted, the end of boxing as we know it but just an entertaining fight."

The victory will now open up the possibility of a fight against WBC world heavyweight champion Vitali Klitschko - who Haye has been calling out for over two years.

On a possible fight with Klitschko, Haye said: "I've sent out a very scary message. I'll be surprised if Vitali Klitschko wants to fight me after that. He will no doubt try to fight some chump nobody has ever heard of and then retire to be a politician."

For Haye this was redemption following his comprehensive points defeat to Wladimir Klitschko last year. Haye retired following that defeat but was tempted to make a return to the ring after he was involved in an ugly brawl with Chisora at a news conference in Munich in February 2012.

That set up a widely-hyped grudge match and in front of 30,000 fans at a rain-soaked Upton Park this fight lived up to its billing.

Chisora, 28. entered the ring hooded and masked to the theme music from Gladiator as the rain pelted down while Haye as ever looked relaxed and focussed.

And it was Chisora who landed the first clean punch of the fight - a solid left hook that rattled the chin of Haye. But Haye, wearing trainers, was in the mood to fight and he shaded the opening three action-packed rounds before the first moment of controversy.

As the bell sounded Haye was caught with two cheap shots from Chisora, the second - a huge left - rocked Haye as he stumbled back to his stool.

It served only as motivation for Haye, and after the pair stood toe-to-toe trading some fierce shots in a thrilling fourth round, the 31-year-old finally floored his man in explosive fashion.

After stalking his man throughout the round, a huge left-right combination from Haye in the final minute of the fifth floored Chisora who bravely climbed to his feet.

It took five more brutal punches for Haye to finish the fight - all of which Chisora took flush, including a sickening final left hook - with the end coming just in time for the bell. Again Chisora climbed to his feet, but he was in no condition to box on and the contest was ended by referee Luis Pabon.

Despite starting the contest as bitter rivals, the pair embraced at the conclusion of the fight, shaking hands and bringing an end to their feud.