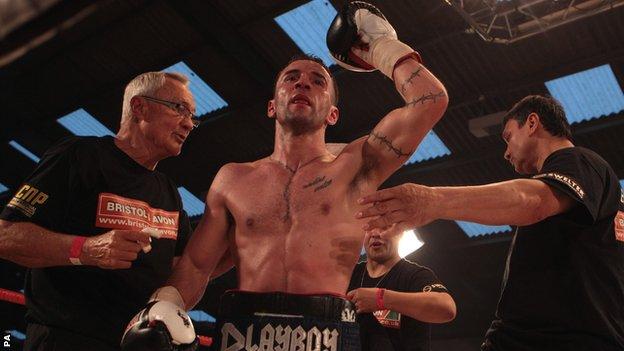 Bristol's Haskins overcame Darlington's Stuart Hall on points at the Hand Arena in Somerset on Saturday.

"He may have to defend this one once or twice but hopefully we'll then get a challenger for the world title," Saniger confirmed to BBC Points West.

And the former flyweight and super-flyweight boxer believes it was the best performance of his career.

"I thought I boxed perfectly to plan," said Haskins.

"I thought I showed maturity, skill, cleverness and patience; we're up and coming now.

"It means everything to me. It's like a world title to me and I'm so glad to have it after all the hard work I've put in to training."

And Haskins credited his success to trainer Mehdi Bellarbi.

"We've been together since we were 18 and he's a top pads man and a top trainer," said the Bristolian.

"If you listen to him he really comes up with the best game plans.

"I couldn't have done it without him."