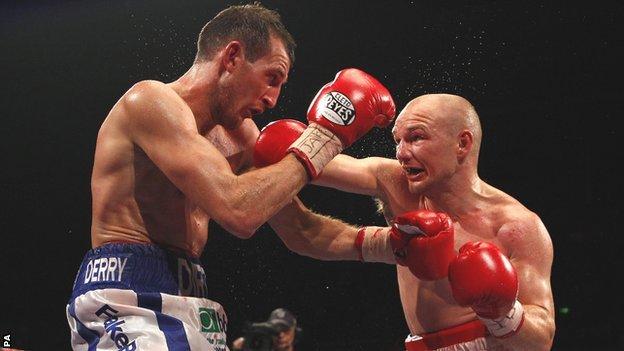 Gavin Rees stopped Derry Mathews in the ninth round in Sheffield on Saturday to keep his European lightweight title and take Mathews' British belt.

Mathews had bossed the early rounds, using his reach advantage, until he was caught with a heavy right in the third.

The Liverpudlian also suffered a cut left eye after a clash of heads in that round and Rees then took control.

The bell saved Mathews in the eighth after being caught on the temple, but Rees then ended things with a flurry.

The fight was a rematch after last year's bout in Newport was cut short when challenger Mathews broke his nose following a clash of heads in the fourth round.

It was tough luck on Mathews to suffer a similar fate at the Motorpoint Arena, knocking him out of his stride after a promising start.

The 28-year-old British champion - who took the domestic title from Anthony Crolla - up until that point had boxed Rees at distance, causing the Welshman's shots to drop short and then countering with snaking replies.

But Rees connected with a solid shot to the head in the third and that, coupled with the clash of heads that left Mathews' left eyelid dripping blood, sapped his confidence.

Rees started to walk through Mathews' shots after that, finding his target with regularity and landing the more concussive blows.

Mathews perked up at the start of the eighth and, with the scorecards still in the balance, threatened to take the fight away from Rees once more with good combinations and one stinging uppercut.

But the 32-year-old Welshman replied with an overhand that wobbled Mathews and only the bell saved him as Rees moved in for the kill.

It was a temporary reprieve as Rees jumped on the Liverpudlian at the beginning of the ninth, sending Mathews to the canvas under a flurry of blows.

Mathews gamely tried to beat the count and wobbled to his feet but referee Howard Foster had no option but to count him out.

Former WBA champion Rees, who was making his second defence after a seventh-round stoppage of Anthony Mezaache in France, is now likely to get the chance to fight for another world title.

Before the fight the Welshman's promoter, Eddie Hearn, had said: "I am in discussions for a major world title fight in October for Gavin.

"Victory should seal the deal for Gavin and it's a massive boost for him ahead of a tough night."

On the same night in Sheffield, Merthyr Tydfil's Kerry Hope lost his rematch for the European middleweight title against Poland's Grzegorz Proksa.

Hope had taken the belt off the Pole in the same Sheffield arena last March and left Proksa seeking revenge on his Welsh opponent.