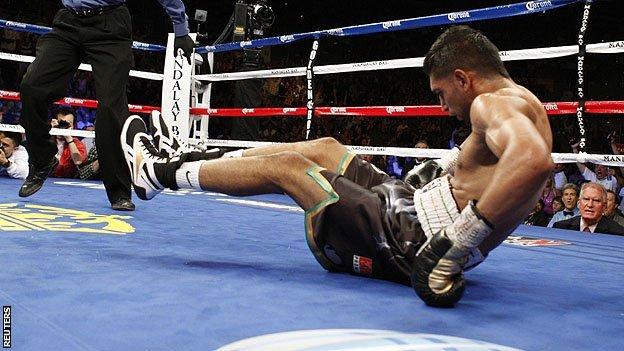 When Amir Khan steps into the ring against Carlos Molina on Saturday night in Los Angeles (05:00 GMT Sunday), attempting to win back some pride after back-to-back losses, he might take inspiration from Muhammad Ali's words of wisdom.

Ali once said that "only a man who knows what it is like to be defeated can reach down to the bottom of his soul and come up with the extra ounce of power it takes to win".

And it is likely Khan, who describes this fight as "make or break", will have to find similar reserves of determination against Molina after July's shock of being stopped in the fourth round by Danny Garcia in Las Vegas.

That followed a disputed loss to Lamont Peterson in December 2011, when he was beaten in controversial circumstances, with a rematch scrapped after the American tested positive for synthetic testosterone.

Khan, 26, needs a victory against Molina to silence his critics and, according to one of the men who knows the Bolton-born fighter best, he has always been capable of bouncing back from defeat.

"Amir was beaten nine times as an amateur, although some of them were because of bad decisions, and he was always keen to get back into the ring and right his wrongs," said Mike Jelley, who linked up with the "chubby, hyperactive 10-year-old" Khan at Bury Amateur Boxing Club.

"I think there was only one opponent, possibly two, who he didn't fight again and, in the rematch, Amir always won because he knew where he had gone wrong.

"He did the same when he fought and beat Mario Kindelan after losing to him in the 2004 Olympic final.

"He always wants to set the record straight if he can, and on Saturday he'll want to prove he has learnt his lesson from his last fight."

Khan has been widely criticised since that defeat to Garcia, when he was knocked down three times - IBF super-middleweight champion Carl Froch saying he should retire.

It has been a turbulent time for the Brit, who has since split with world-renowned coach Freddie Roach and linked up with Virgil Hunter.

Khan admitted that he needed to go back to basics. "I'm an offensive fighter and I need my trainer to teach me about defence," he said.

He might have found the perfect home at Hunter's California-based gym, though, judging by the thoughts of another of Hunter's stable - super-middleweight king Andre Ward.

"I think Amir is one of the best offensive fighters in the game," Ward told Fighthype. "He has his own style, but it's effective.

"If he keeps getting a concept of defence, it's going to enhance his offence and I think he's just going to be really hard to beat."

So while Khan will be hoping for a short and positive night's work against Molina, there will be plenty of spotlight on his defence.

Jelley has remained close to Khan ever since he turned professional and worked with other trainers.

He believes his protege's new set-up away from the ring should be beneficial.

"Sometimes boxers need to run away from an opponent for a couple of rounds," he said. "He has got a new trainer now and he has to realise it is not always about pleasing people with a knockout. It's like driving a car - if you drive it at 100mph you are likely to crash.

"He is a very quick thinker and, although people say he can't take a punch, I can assure you he can. I have watched every fight in his career, and he can take a punch.

Successive defeats in boxing can bring about a swift fall from grace, but Jelley believes Khan can take heart from the many world-class fighters who have several losses on their record - such as former world pound-for-pound king Manny Pacquiao.

"Not many top fighters go through their career without getting beaten," said Jelley.

"It's how they come back from defeat that matters and I have every confidence Amir can do that. I spoke to his father recently and he says Amir is taking on board everything his new coach is telling him.

"If he does that, he can win and return to the top level. If he loses, he will have to come back here and fight domestically or, as I read the other day, he might consider retirement.

"I don't know what he will do, but this fight is incredibly important to him."

During his 50 years running Bury ABC, Jelley, 68, has put thousands of fighters through their paces and he was quick to spot Khan's potential - looking back with fondness at his time coaching the future world champion.

"Amir was a bit disillusioned with the sport when he joined me," remembers Jelley. "He was overweight and hyperactive.

"I knocked a stone off his weight in the first 12 months and slowly we developed him where he was soon winning every competition he entered.

"He started at the bottom and worked his way up. He was always really dedicated, never missed training and he would always listen.

"He needs to show that same ability now."