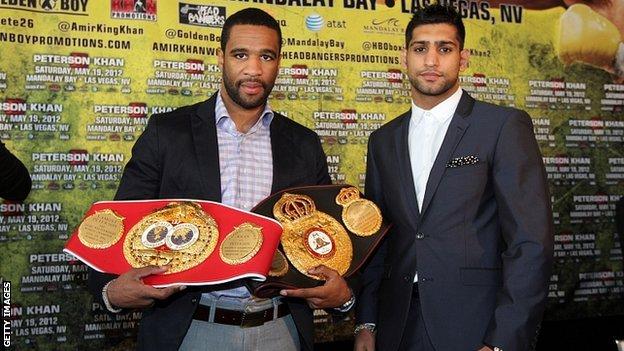 Lamont Peterson says Amir Khan is incapable of altering his game-plan for their May rematch and that his British rival is mentally "all over the place".

American Peterson beat Khan on a split decision last December, after which Khan claimed he had been robbed of his WBA and IBF light-welterweight belts.

And Peterson added that Khan's pronouncements had only succeeded in piling extra pressure on himself.

"He'll do what he always does, he always fights the same," said Peterson.

"He's either straight forward or straight back. That's the way he fights, he's not going to change it.

He's still out there saying he's the champ, but he's not. He's all over the place. Really, I don't know what to make of him

"The way the fight went the first time, I was pretty comfortable with it. I won the fight so I really don't want to change anything."

Khan's trainer Freddie Roach has promised his charge will employ different tactics for the return bout at the Mandalay Bay in Las Vegas on 19 May.

In the first fight, Khan found himself fighting off the ropes for sustained periods, allowing the challenger to work to the body and eventually leading to a two-point deduction for pushing.

But while Peterson admits the choice of referee could prove crucial, he is confident he is versatile enough to adapt whoever is chosen.

Veteran official Joe Cortez, who has a reputation for preventing inside fighting, is widely expected to take charge of the rematch.

Peterson, 28, told BBC Sport: "His strategy [in the first fight] was to hit and move and I didn't allow him to do it. It won't be any different this time. He'll hit and move and I'll stay close and smother him.

"The referee we had [Joe Cooper] allowed me to fight out of clinches, and I liked that, that tends to favour my style.

"If he calls break every time we get on the inside, then I'll have to change my strategy and do something different, anything I need to do to win the fight.

"The referee will be key but I'm not worried about it either way, I'll win the fight, I'll do what I have to do.

"I'll be relaxed like I always am in the ring, but he's putting a lot of pressure on himself, saying he won the last fight, saying he's going to change this and that for the next fight.

"He's still out there saying he's the champ, but he's not. He's all over the place. Really, I don't know what to make of him.