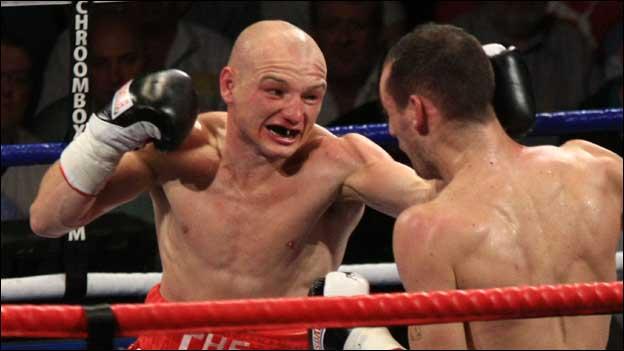 The referee stepped in with 42 seconds left of the seventh round as Welshman Rees landed several unanswered blows.

Mezaache had been knocked down for the first time moments earlier and the champion pounced ruthlessly to end the Frenchman's spirited resistance.

The victory in France was 31-year-old Rees's second defence of the European belt, taking his record to 36 wins from 38 professional fights.

His first defence against Derry Mathews in October ended prematurely when Mathews sustained a broken nose from a clash of heads.

And fears of a similar outcome grew against Mezaache as blood began to pour from a cut to the former European champion's forehead in the third round.

But the fight continued and Rees began to reassert his dominance in the fifth with sharp, powerful combinations.

The onslaught continued in the sixth, while an increasing clumsy Mezaache showed plenty of heart, his face covered with blood as he trudged back to his corner after the bell.

Rees attacked the body early in the seventh before forcing the Frenchman down to one knee with a fierce straight right to the challenger's chin.

Several clean head shots followed as Rees overwhelmed his opponent on the ropes, giving the referee little option but to stop the contest and spare Mezaache from further punishment.