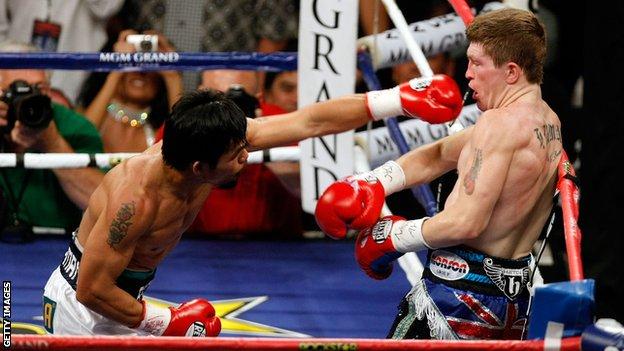 Former boxer Ricky Hatton has revealed how he broke down two weeks before his final fight against Manny Pacquiao.

The 33-year-old believes his pre-fight camp did not prepare him properly.

"I had peaked too soon, everyone in the camp could see I needed a rest. There was one day when one of my sparring partners knocked me on my backside," he told BBC Radio Manchester.

"I came out of the ring, sat on the steps and put a towel over my head and I just started sobbing and crying."

He continued: "They say 'you've over trained, you've left it in the gym' is the most common phrase used in boxing but my god it is the truest.

"All this was two weeks before you fight the number one pound-for-pound fighter in the world."

After turning professional in 1997, 'The Hitman', as Hatton became known, went on to dominate the light-welterweight division with his most notable victory at that weight coming in 2005 against IBF champion Kostya Tszyu.

In 2006, Hatton became a two-weight world champion after he defeated Puerto Rican Luis Collazo to take the WBA welterweight world title, and he followed that victory by beating Juan Urango to reclaim his IBF light-welterweight title.

Hatton split from long-term trainer Billy Graham after being beaten by Mayweather and returned to the ring with victories over Juan Lazcano and Paulie Malignaggi in 2008 before taking on the world's pound-for-pound best fighter Pacquiao in 2009.

It was a bout that proved too much for Hatton, who was knocked down twice in the first round before being knocked out cold in the second.

The Hyde boxer retired after that defeat, setting up his own promoting business, but suffered heavily from depression that got to such a stage he considered ending his own life.

"I definitely contemplated suicide," he added. "It was over a long period of time I'd go out, have a night out, come home and I'd be getting the Stanley knife out.

"And I never did, but it eats away at you. Who knows one day I might have turned up and gone ahead with it.

"But it was getting most weeks I'd find myself sat on the settee at stupid o'clock in the morning thinking 'go on just do it'.

"I'm sure people have started off the same way and sadly done it. Thankfully through the support of my family, my girlfriend and everything like that it never got to the stage where I actually went through with it."

Ricky Hatton is 'In the Spotlight' on BBC Radio Manchester on Thursday, 1 March at 1800 GMT talking about his life and career. If you miss the show you can listen again via the iPlayer or download the podcast.