Tony Bellew is sure he will soon get another chance to fight Nathan Cleverly for his WBO light-heavyweight crown.

Bellew was handed an 11th hour title shot last month when ex-champion Juergen Braehmer withdrew from a clash with Cleverly two days before the show.

But Bellew was forced to pull out when he failed to make the weight limit, as Aleksy Kuziemski stepped in and was beaten by Cleverly at the O2 Arena.

"The bout with Cleverly is within touching distance," Bellew said.

The Englishman is preparing for a rematch with Ovill McKenzie in his home-town of Liverpool on 16 July for both the Commonwealth and British light-heavyweight crown. 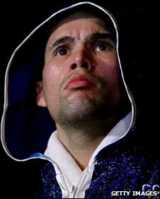 I think the exposure and the build-up between myself and Cleverly now is massive. People want to see the fight.

But Bellew wants a second chance at fighting long-time rival Cleverly after the pair memorably clashed in a pre-fight press conference in London.

The Liverpudlian, however, was unable to go head-to-head with Cleverly in the ring as Bellew could not make the required 12st 7lb weight limit.

While Cleverly - who was handed Braehmer's title after the German's no-show - went on to defeat Pole Kuziemsk in a fourth-round stoppage in his first world title defence, Bellew was left to reflect on what might have been.

But the 28-year-old, who is involved in a row over drug-taking allegations, is sure it will not be long before he is handed the chance to make amends.

"It was the darkest 36 hours of my life," Bellew said.

"I lost a stone in 24 hours and I just needed to lose a bit more. I just couldn't get it down any more and I was devastated.

"But that is just how it goes. What doesn't kill you makes you stronger. I have always been very strong mentally and I know how to rebound and get on with things.

"I'll just keep doing what I'm doing, setting my goals and striving to achieve them.

"My chance will come, without a shadow of a doubt. I think the exposure and the build-up between myself and Cleverly now is massive.

"People want to see the fight, everybody is itching to do it, so it is there.

"The bout with Cleverly is within touching distance, but I have to come through 16 July.

"It means nothing if I don't come through this next fight. My full focus is on McKenzie and then we can start talking about Nathan Cleverly."

Wales' 11th world boxing champion, however, may have bigger targets than a domestic dust-up with Bellew.

WBA light-heavyweight champion Beibut Shumenov has challenged Cleverly to a unification showdown in the United States, while the 24-year-old wants to take on American great Bernard Hopkins.