Kobe Bryant was "one of the most extraordinary players" in the history of basketball who "inspired people around the world" to play the game.

The 41-year-old died in a helicopter crash in California on Sunday along with his 13-year-old daughter Gianna.

Bryant, who retired in 2016 after a 20-year career with the LA Lakers, was a five-time NBA champion and was named an NBA All-Star 18 times.

He and his wife, Vanessa, have three other daughters - Natalia, Bianca and Capri.

"The NBA family is devastated by the tragic passing of Kobe Bryant and his daughter, Gianna," said NBA commissioner Adam Silver.

"For 20 seasons, Kobe showed us what is possible when remarkable talent blends with an absolute devotion to winning. He was one of the most extraordinary players in the history of our game with accomplishments that are legendary.

"But he will be remembered most for inspiring people around the world to pick up a basketball and compete to the very best of their ability.

"He was generous with the wisdom he acquired and saw it as his mission to share it with future generations of players, taking special delight in passing down his love of the game to Gianna."

Shaquille O'Neal, who won three NBA titles alongside Bryant for the LA Lakers, said: "There's no words to express the pain I'm going through with this tragedy of losing my niece Gigi & my brother, my partner in winning championships, my dude and my homie.

"I love you and you will be missed. My condolences goes out to the Bryant family and the families of the other passengers on board. I'm sick right now."

The NBA's all-time leading scorer Kareem Abdul-Jabbar, who played for the Lakers from 1975-1989, said: "It's very difficult for me to put in words how I feel. Kobe was an incredible family man, he loved his wife and daughters, he was an incredible athlete, he inspired a whole generation. This loss is hard to comprehend."

Former US President Barack Obama wrote on Twitter: "Kobe was a legend on the court and just getting started in what would have been just as meaningful a second act. To lose Gianna is even more heartbreaking to us as parents. Michelle and I send love and prayers to Vanessa and the entire Bryant family on an unthinkable day."

US President Donald Trump said: "Kobe Bryant, despite being one of the truly great basketball players of all time, was just getting started in life. He loved his family so much, and had such strong passion for the future. The loss of his beautiful daughter, Gianna, makes this moment even more devastating."

Former LA Lakers president Magic Johnson, a five-time NBA champion in the 1980s, tweeted: "Kobe was a leader of our game, a mentor to both male and female players. Words can't express the impact that he had on the game of basketball."

Six-time NBA champion Michael Jordan added: "I loved Kobe - he was like a little brother to me. We used to talk often, and I will miss those conversations very much.

"He was a fierce competitor, one of the greats of the game and a creative force. Kobe was also an amazing dad who loved his family deeply - and took great pride in his daughter's love for the game of basketball."

LeBron James surpassed Bryant to become the NBA's third-highest scorer of all time on Saturday.

Speaking after the game, which was the day before Bryant's death, he said: "I'm happy just to be in any conversation with Kobe Bryant.

Bryant finished his playing career as the Lakers' all-time leading points scorer, and is fourth on the NBA's all-time list with 33,643 points.

The Lakers retired both Bryant's number eight and 24 jerseys in September 2017.

In 2018 he won an Oscar for his five-minute film Dear Basketball, based on a love letter to the sport he had written in 2015.

Iconic golfer Tiger Woods, a 15-time major winner, said he heard the news after completing his final round at the Farmers Insurance Open in California.

"[Caddie] Joey La Cava told me coming off the 18th green. I didn't understand why the crowd was saying 'beautiful Mamba', now I know," he said.

"It's unbelievably sad and the reality is sinking in because I was told about five minutes ago.

"He brought a desire to win every night on both ends of the floor, not too many guys can say that. Any time he was in the game, he'd take on their best player."

Former England captain David Beckham, who also played for LA Galaxy, posted on Instagram: "This was one special athlete, husband, father and friend. Having to write these words is hard enough but also knowing we have lost an amazing human being and his beautiful and talented daughter Gianna is heartbreaking.

"The commitment Kobe showed to his sport was inspiring, to go through the pain and to finish a game off like only he could inspired me to try to be better.

"Kobe always talked about Vanessa and his beautiful girls and how proud he was of them. Kobe's passion was his family and basketball. He was determined to inspire the next generation of boys and girls to embrace the sport that he loved. His legacy will live on."

Former world heavyweight boxing champion Mike Tyson wrote on Twitter: "I mourn with the world. Lost a legend. No words. I'm messed up. RIP Kobe Bryant, Gianna and the rest of the passengers."

Barcelona forward Lionel Messi wrote on Instagram: "I have no words... All my love for Kobe's family and friends. It was a pleasure to meet you and share good times together. You were a genius like few others."

Juventus forward Cristiano Ronaldo said the news was "heartbreaking", adding Bryant was "a true legend and inspiration to so many", while Manchester United midfielder Paul Pogba added: "Heroes come and go, legends are for ever."

Britain's six-time Formula 1 champion Lewis Hamilton said: "I'm so sad to hear that we lost one of our greats. Bryant was one of the greatest athletes and was such an inspiration to so many, including myself."

After scoring a second-half penalty, he held up two fingers on one hand and four on the other, marking Bryant's Lakers shirt number of 24.

The Brazil striker, a basketball fan who had met Bryant, also bowed and pointed to the sky.

World number one tennis player Rafael Nadal tweeted: "I woke up this morning with the horrible news of the tragic death of one of the greatest sportsmen in the world. Kobe Bryant, his daughter Gianna and other passengers. My condolences to his wife and families. I am in shock." 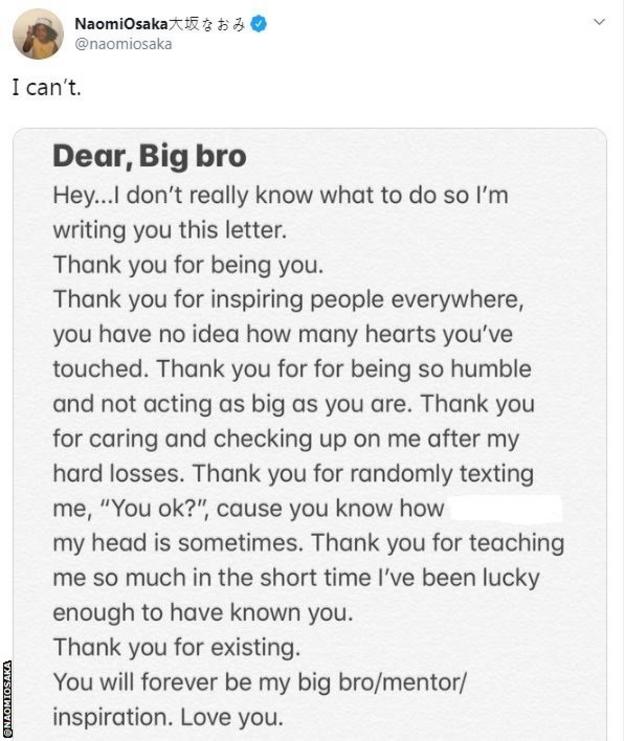 Nick Kyrgios wore an La Lakers shirt with Bryant's name and number on it as he warmed up before his fourth-round match against Nadal at the Australian Open. 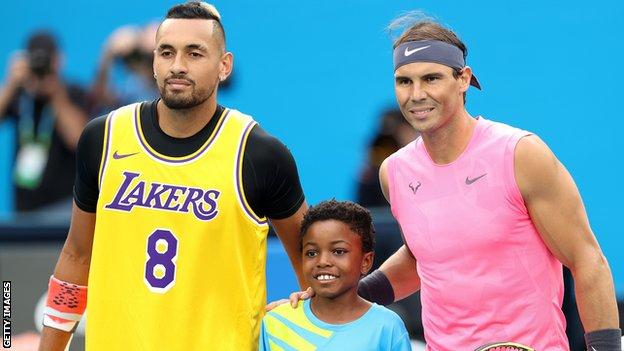 A moment of silence was held before the Toronto Raptors' game against the San Antonio Spurs in Texas.

The two teams also let the 24-second shot clock run out at the start of their game to honour Bryant.

The New Orleans Pelicans and the Boston Celtics also started their game by each taking 24-second shot-clock violations.

At the Grammy Awards held at the Staples Arena, where Bryant played, many recipients paid tribute to the former Lakers superstar.

Hundreds of fans gathered outside the venue after his death; while his image was projected on screens around the arena.

Kim Kardashian and husband and rapper Kanye West, US singers Justin Bieber and Taylor Swift and Oscar-winning Leonardo DiCaprio were among those to tweet their tributes.