The 33-year-old beat Chamberlain's record of 31,419 points with a free throw late in the fourth quarter.

It was the highest score by a Lakers player since Kobe Bryant's 60 in his final game in April 2016.

Lakers and Philadelphia 76ers legend Chamberlain, a four-time most valuable player, won two NBA championships, in 1967 and 1972, in his 14-year career.

He is also the only player to have scored 100 points in an NBA game.

"Anytime my name is mentioned with some of the greats to play the game, I always think back to my hometown where I have come from and how far I've come," said James, who joined the Lakers as a free agent in July on a four-year deal worth $154m (£116m).

In a 15-year career, the four-time MVP has won three NBA titles, two at Miami Heat and one at Cleveland Cavaliers.

James added: "He [Chamberlain] is one of the most dominant forces we have ever had in our game along with Shaq [Shaquille O'Neal]. He is one of the greatest Lakers to ever play the game, one of greatest scorers and rebounders ever.

"People had never seen someone like that in that era. He was dominant in all walks of life, not just basketball."

Lakers coach Luke Walton added: "It is important to recognise milestones in the game, to do what he did and get in the top five of that list and play way he plays, how unselfish he is, is something that should be praised and talked about."

Former Governor of California and Hollywood actor Arnold Schwarzenegger, who starred in the 1984 film Conan the Destroyer with Chamberlain, tweeted his congratulations to James. 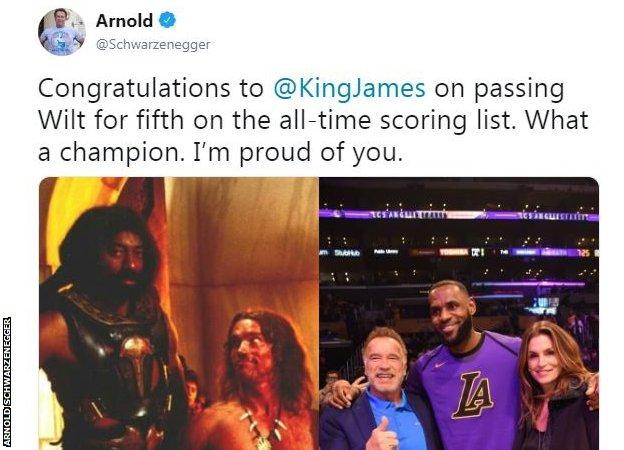